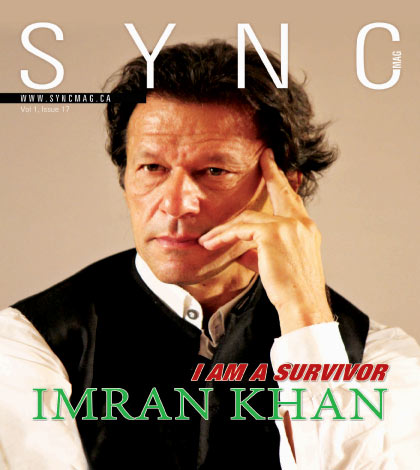 A name, a recognition, an achievement, an honor, a legendary cricketer and a revolutionary leader who instilled new soul in the youth of the nation. A fanatical icon, whatever he touches turns to gold.

Before starting his political career, Imran Khan was famous because of two reasons. Cricket and Shaukat Khanam Cancer Hospital. The place where he stands today has been achieved after intense struggle and hard work and one can only
applaud the great man.

Huma Akbar in conversation with Imran khan!
The upcoming general elections have not only raised a new wave of passion and patriotism in the Pakistani nation but have after decades stirred the nation towards responsible elections and participation in the culture of change and determination of their own leader- democracy has finally started to unveil itself in Pakistan; and this drastic transition is being said to have been instilled due to the passionate, rebellious, idealist and humanitarian leadership of Chairman Pakistan Tehreek-e-Insaaf; Mr. Imran Khan.

It was a pleasure to discuss and share the National hero’s passion upfront as we talked about his childhood, his belief system, his “imaan” and faith in Allah, the transition in his life primarily due to the death of his mother and his journey towards politics from what is rather a comfortable and always successful lifestyle!

With passionate words and a sincere voice, Khan explained how back in his child hood and youth days- Pakistan was a country where Pakistani’s were proud to be, it was a country that resonated success, growth, fame- where people from all around the world would love to come and Pakistani’s would live in pride- with immense remorse he stated how the political status quo has brought the country to this date- where we are forced to beg for survival, where poverty and corruption have become a norm and where the political elite remain numb to the national degradation. It was interesting to see Khan’s faith in not only HIS country but himself- which he determined to be the basis of his Muslim Faith and the “Imaan” that he had in his God, in Allah- that keeps him going despite opposition or mockery and always leads him to victory in the face of the worst adversity. “Everyone would laugh at me when I wanted to first become the first bowler, they again laughed at me when I wanted to build the largest cancer hospital in Pakistan, once again when I joined politics I was mocked at; but I never let my faith in Allah get low, I always believed that I will ask him for success and work towards my goals- and it is HIM who will give me the success on my way”…with a smile he said “which he did and all those who had mocked me earlier would praise me now”.

With no guards or political protocol around the house, a simply decorated paradise as he calls it with a bunch of guard dogs, and hospitality enough to have served the drinks himself- Mr. Imran Khan certainly gained a high level of personal respect from myself during this short but extremely insightful interaction- a true leader, a noble human being and a passionate patriot for the nation!

By: Jawad Gillani
In 1996, Khan founded a political party, Pakistan Tehreek-e-Insaf (PTI), which emphasized on anti-corruption policies.Passing through the various political stages Khan passed the “Naya Pakistan Resolution” (New Pakistan) at the start of his election campaign while addressing a large rally at Iqbal Park on 23 March 2013. Imran gave message to the nation by saying “This is your country! No one will come outside to mend it, to run it. Whatever you have been deprived of in all these years, it’s time to get it back.”

When Imran Khan entered the Pakistani Political scene back in the mid 90’s hardly anyone believed that he could make any impact to the political landscape of the country. A country ruled by politicians from mostly feudal or business back ground, hardly found any representation of what we call “the common man”. The era of post General Zia ul Haq saw much more political activism compared to choices the public of Pakistan had earlier. With this a new phenomenon of democracy was born, where people could see their representation in a Parliament house. Initially these were baby steps for democracy but still some progress until the Presidential Order started to play its card, when twice People’s Party and Nawaz Sharif government became a victim or one reason or the other. Both the PPP and PMLN had their chances as well as opportunities but both failed to cash in. And once again the people of Pakistan and especially the youth were left to wondering.
The phenomena or rather an ideology known as Pakistan Tehreek k Insaf (PTI) is changing the course of history of politics in Pakistan. They seem to have correctly tapped into the resource which was yet to be discovered by other political opponents. The youth, who have got an unconditional love for the ideology of Imran Khan showed their true sprit when the PTI Chief fell off the forklift and sustained some serious injuries. The entire nation was at a standstill, glued to their TV screens, calling friends, contacts within the PTI just to know the status of their beloved hero.

There were some emotional scenes at Shaukat Khanum Memorial Hospital itself. Thousands of people gathered outside the hospital to show their support and love for the great Khan. Though great in numbers this crowed was highly organized with PTI workers organizing and keeping the calm in the given situation. There were dads, moms, sisters, brothers, uncles, rickshaw drivers to the elites; you name it. There were moms waiting in cars on the road sides whose kids have gone in to join in the crowed at the SKMT gates. People had to park their cars a kilometer away just to reach the gates where people had gathered to give blood. A charged nation was all outside the gates of SKMT chanting “Long Live Imran Khan’ and then it happened, about 20 young political workers on 10 motor cycles, holding PMLN flags and wearing bandanas, appeared through the PTI crowed and went straight towards the main gates of SKMT. No one stopped them nor they seem to have feared for a moment, parked their motor bikes and joined the crowed in chanting slogans for Imran Khan, holding their PMLN flags. This moment was the true representation of what Imran Khan means to this entire nation. He is a symbol of hope and change and unity which the nation of Pakistan is waiting for decades.

We are all praying for a sixer for our captain to complete the century……….

Author adminPosted on June 25, 2016June 25, 2016
Brutal with the bat, slippery with the ball and with enough body art that he could open up his own exhibition, ‘Arman Usman’ an...
Read More