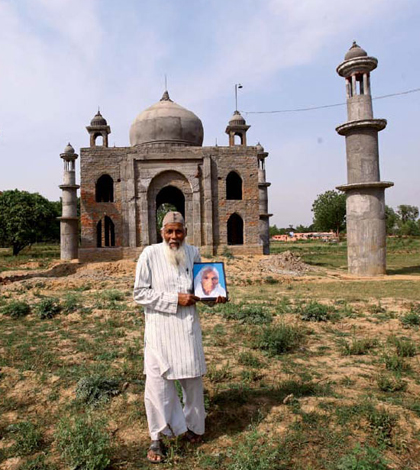 A retired government official in a northern Indian village is building a scaled-down replica of the historic Taj Mahal in memory of his wife of 58 years.
Faizul Hasan Quadri, 77, is building his “monument of love” for Tajammuli Begum in his nondescript village in Bulandshahr district in Uttar Pradesh state.
Separated in time by nearly four centuries, the men behind the world famous original Taj Mahal at Agra and the replica share one thing in common: an extraordinary love for the women in their lives and an all-consuming passion to make their love immortal.
And just like the Mughal Emperor Shahjahan’s white-marble monument attracts thousands of visitors, a steady stream of curious visitors from nearby villages is coming to see Mr Quadri’s Taj take shape.
“You see, my wife and I were childless, so she always used to say, ‘after we are dead, there will be nobody to remember us, we will be forgotten’. So I promised her that if she were to die before me, I would build such a beautiful mausoleum for her that people would remember her for ages,” Mr Quadri says.
‘Not a place of worship’
Tajammuli Begum died of cancer in December 2011.
“She was only 14 when we got married, I was about three years older… She was a very soft-spoken, simple, sweet-natured person, and everyone just loved her. When we got married, she was illiterate. Later, I taught her the Urdu language, but she could never write.
“We were together for more than 58 years, and love grows with time. Now that she is gone, she is always there in my thoughts,” he says.

The perfectly-shaped dome and minarets of Mr Quadri’s Taj are already in place, but a lot of work still remains. The latticed windows, landscaped gardens and white-marble exterior are yet to be done, but despite running out of money, he has refused offers of help.
“This is not the mausoleum of a saint or a place of worship, this is just my wife’s tomb, and I don’t want to build her memorial using donations from others. I want to finish it using my own money, no matter how long it takes,” he explains.
Mr Quadri has sold a piece of his farmland, his wife’s jewellery and used up his life’s savings to meet the spiralling cost of construction. He has already spent more than $15,000 (£9,872) and says he needs at least $10,000 (£6,581) more.
“I have tried to keep my promise, and I won’t give up, no matter what it takes,” he says.
Just as in the original Taj Mahal, Mr Quadri has left space for his own grave next to his wife’s and prays that “we should be together in the afterlife as well”.

Soccer And Milkshakes: Exotic Priyanka Is A Hit In Hollywood

Author adminPosted on September 17, 2015September 17, 2015
ALMATY: Security forces in Tajikistan said on Wednesday they had tracked down and killed the country’s former deputy defence minister who had been charged...
Read More

Author syncmagPosted on May 13, 2013May 13, 2013
True love for the Great Khan is being witnessed in every nook & corner of Pakistan. The excitement surrounding elections has reached fever pitch!...
Read More
In-Sync
Author syncmagPosted on March 25, 2013April 11, 2013
LAHORE: GATHERING of the Pakistan Tehreek-e-Insaf (PTI) at Minar-e-Pakistan on March 23 may not only help it regain its lost ground it had attained...
Read More

Author adminPosted on February 14, 2013
A broken water main sent water cascading down McTavish St., literally sweeping pedestrians off their feet. Several buildings on the McGill campus have been...
Read More