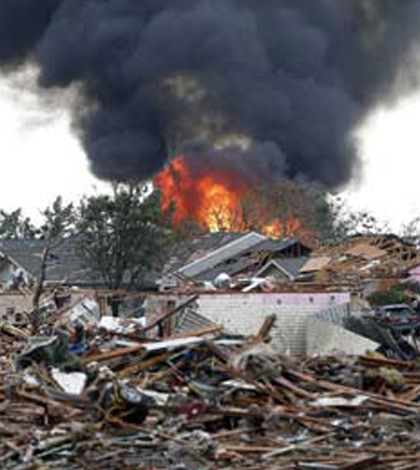 WASHINGTON: A powerful tornado swept through an Oklahoma City suburb on Monday, tearing down blocks of homes, two schools and leaving at least 91 people dead, including 20 children, local officials said.
The state medical examiner’s office released the latest death toll but the number was climbing rapidly, as emergency crews combed through smashed homes and the collapsed remains of an elementary school in Moore, Oklahoma.

“We’ve had a massive tornado, a huge one that has passed through this community,” Oklahoma’s Governor Mary Fallin told a news conference.

“We know there are a lot of injuries. We know we’ve lost a tremendous amount of structures throughout this community and throughout the state,” she said, as the Moore police chief urged people to leave the area.

“There are a lot of safety issues, gas lines, power lines, things of that nature, that we have to take into consideration and there’s just not much else that can be done there at this time,” police chief Jerry Sillings said.

The dead included at least 20 children, most of them under the age of 12, Amy Elliott, of the state medical examiner’s office, told AFP. She later told CNN in a televised interview that the total death toll had risen to 91.

CNN reported that at least 145 people had been hospitalized.

Reporters for local broadcaster KFOR-TV saw children as young as nine being pulled out of the Plaza Towers Elementary School in Moore, a residential community of 55,000 just south of Oklahoma’s state capital.

Anxious parents were being kept at a distance while search-and-rescue workers scrambled to free the students.

A second elementary school, Briarwood, was also hit but did not appear to have sustained casualties.

From its news helicopter, KFOR’s cameras captured scenes of widespread destruction, with street after street of single-story homes in Moore stripped of their roofs and cars piled atop each other like toys.

Utility lines were down and gas lines exposed, triggering localized fires. The Moore Medical Center was evacuated after it sustained damage, and state authorities called out the National Guard to help rescue efforts.

Author adminPosted on August 10, 2015August 10, 2015
HARIPUR: The Election Commission of Pakistan (ECP) has decided to introduce the biometric system at 30 out of NA-19, Haripur’s 537 polling stations on...
Read More

Author syncmagPosted on January 16, 2013January 17, 2013
It’s all about understanding the cosmic purpose behind everything, which the Mayans never did. Now that Ali Zafar has been voted at the 2nd...
Read More