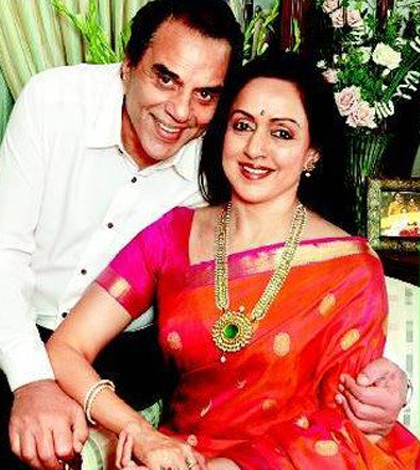 Romance is an everlasting element of Bollywood love stories, but love has no boundaries. Our B’town celebs, who romanced each other on reel turned out to be the real life partners and the undying chemistry enthralled one and all.

1. Dharmendra and Hema Malini: Love has no boundaries and the dream girl and ‘He-man’ of Bollywood came together. Hema Malini and Dharmendra fell in love on the sets of movie Tum Haseen Main Jawan. Dharmendra was already married with two kids, but that didn’t deter the two. They tied the knot in 1980 and before the marriage, Dharmendra converted into Islam to marry again.
2. Jaya Bhaduri and Amitabh Bachchan marrried in 1973 and many hearts broke. The duo did many films together like Abhimaan, Sholay, Zanjeer, Mili, Silsila and Chupke Chupke. Their on-screen chemistry was loved by one and all. They had a very simple wedding and are one of the most popular Bollywood couple.
3. Rajesh Khanna and Dimple Kapadia married in 1973. Dimple Kapadia was 16 at that time and Rajesh Khanna was 15 years older than her. But that did not stop the lovers from tying the knot. Dimple and Rajesh have two daughters Twinkle and Rinke. Rajesh and Dimple separated in 1984 but did not complete the divorce proceedings. Both had an on-off relationships.
4. Dilip Kumar and Saira Banu: Dilip married actress and beauty queen Saira Banu in year 1966, He was 44 at the time while she was 22. Gopi, Sagina and Bairaag was some of the movie they did together. In an interview, Saira Banu stated that when she entered Bollywood, she had a dream to marry Dilip Kumar. Fortunately she made her dream come true.
5. Aishwarya Rai and Abishek Bachan: World’s most beautiful woman Aishwarya and the Bachchan junior tied knot in 2007. The duo has worked together in films like Kuch Naa Kaho, Dhaai Akshar Prem Ke, Umrao Jaan, Raavan and Sarkar Raj.
6. Saif Ali Khan and Kareena Kapoor: Saifeena, one of the most talked about couple of Bollywood couldn’t click at the ticket window, but off-screen Kareena Kapoor and Saif are the hottest couple of tinsel town. After her break-up with Shahid Kapoor, Bebo was seen romancing Saif and they tied the knot in 2012.
7. Dev Anand and Kalpana Kartik: worked in many films and Aandhiyan, Taxi Driver, House No. 44 and Nau Do Gyarah became big hits. During the shooting of Taxi Driver, the two fell in love and married in a simple ceremony.
8. Sunil Dutt and Nargis: Supposedly, Sunil’s love for Nargis became prominent when he saved her from a fire accident on the sets of Mother India. The couple got married and was also involved in various social causes.
9. Malaika Arora and Arbaaz Khan: They met during a coffee ad shoot. The ad had bold theme that worked wonders for the couple and their love story started. They went around for 5 years and finally got married in 1998. They had a Christian ceremony as well as an Islamic nikaah and they’re a happily married couple today with a son named Arhaan.
10. Kajol and Ajay Devgn: started dating on the sets of Gundaraj. They took the nuptial vows in 1999 and were blessed with a daughter Nysa in 2003 and son Yug in 2010. They have worked together in films like Hulchul, Gundaraj, Pyaar To Hona Hi Tha, Dil Kya Kare, Raju Chacha and U Me Aur Hum.
11. Rishi Kapoor and Neetu Singh: Both became one of the cutest couple of Bollywood and their fans witnessed their chemistry in films like Kabhi-Kabhi, Khel Khel Mein, Rafoo Chakkar, Amar Akbar Anthony. Their on-screen chemistry was also backed by the comfort they shared off-screen. The duo made a comeback with Habib Faisal’s Do Dooni Chaar, which too was appreciated by their fans.

IIFA 2016 CELEBRATIONS KICKS OFF IN MADRID!

Author syncmagPosted on February 14, 2013February 14, 2013
Not many know that Bollywood megastar Amitabh Bachchan, who is known for his acting, can also fly airplanes.During the grand finale of ‘India`s Prime...
Read More

Author adminPosted on August 10, 2015August 10, 2015
Pakistani actor Fawad Khan has finally broken the silence about his much talked-about kissing scenes with Alia Bhatt and his reasons for his rejection...
Read More

Author adminPosted on January 24, 2014May 23, 2014
Justin Bieber has been arrested for driving under the influence (DUI), resisting arrest, and drag racing in Miami Beach, Florida. The singer was arrested...
Read More