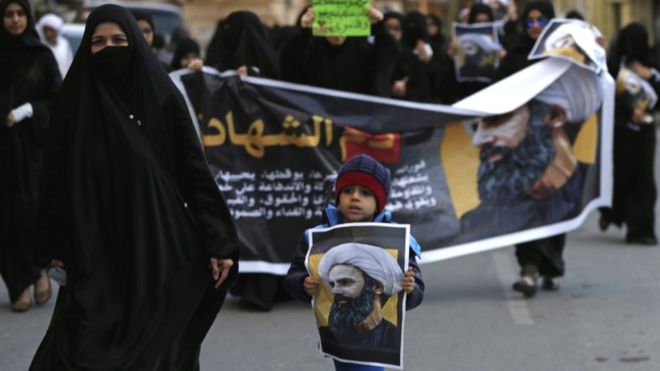 Bahrain has announced it is severing diplomatic ties with Iran, following a similar move by Saudi Arabia.
Saudi Arabia on Sunday gave Iranian diplomats two days to leave after a row over the Saudi execution of a top Shia Muslim cleric and a subsequent attack on its embassy in Tehran.
Saudi Arabia and Iran are the key Sunni and Shia powers in the region and back opposing sides in Syria and Yemen.
Bahrain is ruled by a Sunni Muslim king but its population is majority Shia.
The kingdom on Monday gave Iranian diplomats 48 hours to leave the country.
The United Arab Emirates has said it is downgrading its diplomatic representation in Tehran and will cut the number of Iranian diplomats in the country.
Bahrain accused Iran of “increasing, flagrant and dangerous meddling” in the internal affairs of Gulf and Arab states.
It said the attack on the Saudi embassy was part of a “very dangerous pattern of sectarian policies that should be confronted… in order to preserve security and stability in the entire region”.

Bahrain, which hosts the US Navy’s 5th Fleet, has frequently accused Iran of supporting a low-level Shia insurgency that flared following the regional Arab Spring uprisings in 2011.
There are fears sectarian strife may spread in the region following the execution of Sheikh Nimr al-Nimr and 46 others in Saudi Arabia on Saturday after they were convicted of terror-related offences.
On Monday, two Sunni mosques in Iraq were bombed and an imam killed.

Saudi Arabia announced late on Sunday that it was severing diplomatic relations with Iran after demonstrators stormed the Saudi embassy in Tehran. It has recalled its own diplomats.
Iran’s foreign ministry on Monday accused the Saudis of “continuing the policy of increasing tension and clashes in the region”.

Ministry spokesman Hossein Jaber Ansari said: “Saudi Arabia sees not only its interests but also its existence in pursuing crises and confrontations and attempts to resolve its internal problems by exporting them to the outside.”

He defended Iran’s response to the embassy attack, saying it had “acted in accordance with its obligations to control the broad wave of popular emotion”. Fifty arrests were made.

A diplomatic rupture between the major Sunni and Shia powers in the region will resonate across the Middle East, where they back opposing sides in many destructive wars and simmering conflicts.
Players are already lining up along sectarian lines to support either Tehran or Riyadh.

Last year had ended with a bit of hope that talks on ending Yemen’s strife had, at least, begun. Syria was to follow this month. It looks an awful lot harder now.

In October Saudi sources told me they only dropped their opposition to Iran’s presence at Syria talks after the US persuaded them to test Tehran’s commitment. But they doubt Iran will do a deal, and see it as key source of regional instability.

On the other side, Iranian officials don’t hide their contempt for the Saudi system and its support for Islamist groups. There’s been barely-concealed anger for months. Now it’s boiled over.

Author syncmagPosted on February 4, 2013February 4, 2013
B.C. Premier Christy Clark has confirmed the province will spend $9.5 million to host the first-ever Times of India Film Awards at BC Place...
Read More
In-Sync
Author syncmagPosted on March 14, 2013April 11, 2013
We are Thankful to The Liberal Party of Canada,leader of the party, Mr. Bob Rae and his very wise & able team for their...
Read More

Author adminPosted on October 21, 2015
MUMBAI: India’s far-right political party, Shiv Sena, which has recently been in the headlines for its threats to Pakistani nationals in India, said on...
Read More
In-Sync
Author syncmagPosted on March 15, 2013April 11, 2013
Police officers arrest a demonstrator during a tuition hike protest in front of the legislature Thursday, March 7, 2013 in Quebec city. About 40...
Read More