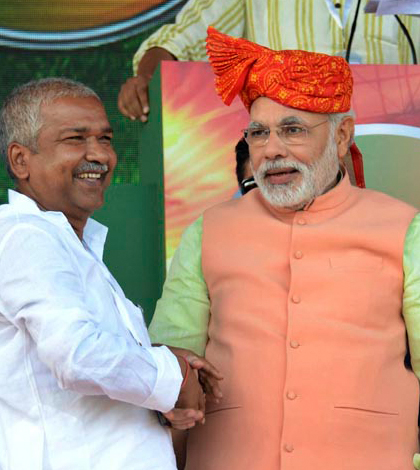 NEW YORK: Pointing out that over 1,000 people, mostly Muslims, were killed in 2002 in the Indian State of Gujarat under his watch, Narendra Modi, who was the State’s chief minister and now opposition BJP’s prime ministerial candidate, may not be able to lead India effectively if he inspires “fear” and “antipathy” among many of its people, the New York Times said in an editorial published on Oct 26.

“His rise to power is deeply troubling to many Indians, especially the country’s 138 million Muslims and its many other minorities,” the Editorial Board of the New York Times said in an editorial.
Mr Modi has shown no ability to work with opposition parties or tolerate dissent, the editorial said, noting that he has already alienated BJP’s political partners when Janata Dal (United), “an important regional party broke off its 17-year alliance with the party because it found Mr Modi unacceptable”.
“India is a country with multiple religions, more than a dozen major languages and numerous ethnic groups and tribes. Mr Modi cannot hope to lead it effectively if he inspires fear and antipathy among many of its people,” said the editorial, which also questioned Modi’s economic track record in Gujarat.
The “economic record in Gujarat is not entirely admirable, either,” it said. “Muslims in Gujarat, for instance, are much more likely to be poor than Muslims in India as a whole, even though the state has a lower poverty rate than the country,” the editorial said.
The Times said ”supporters of Mr Modi argue that an investigation commissioned by India’s Supreme Court cleared him of wrongdoing in the riots.
And they insist that Mr Modi, who is widely admired by middle-class Indians for making Gujarat one of India’s fastest-growing states, can revive the economy, which has been weakened by a decade of mismanagement by the coalition government headed by the Indian National Congress Party.
“There is no question that the Congress Party has failed to capitalise on the economic growth of recent years to invest in infrastructure, education and public institutions like the judiciary. And instead of trying to revive itself with new ideas and leaders, it is likely to be led in the coming election by Rahul Gandhi, the inexperienced scion of the Nehru-Gandhi family. But Mr Modi’s strident Hindu nationalism has fuelled public outrage.”

Author adminPosted on November 16, 2016November 16, 2016
The good news for Donald Trump is that he will become the 45th president of the United States in January. The bad news is...
Read More
In-Sync
Author adminPosted on April 17, 2013
BADIN: Former speaker Fehmida Mirza has said she was neither a defaulter nor obtained any loan from a bank. She said she was on...
Read More