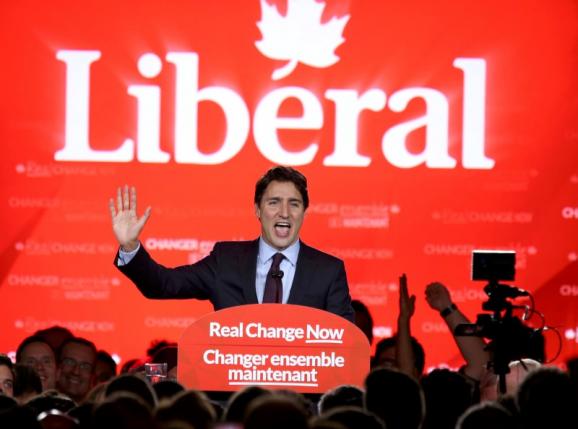 Canada’s Liberal Party has decisively won a general election, ending nearly a decade of Conservative rule.
The centrist Liberals, led by Justin Trudeau, started the campaign in third place but in a stunning turnaround now command a majority.

It was the longest campaign in Canada’s history, and had been thought to be much closer.

Speaking after the polls closed, Mr Harper said he had already congratulated Mr Trudeau, saying the Conservatives would accept the results “without hesitation”.

“We beat fear with hope, we beat cynicism with hard work. Most of all we defeated the idea that Canadians should be satisfied with less.

“This is what positive politics can do,” he said, also praising Mr Harper for his service to the country.

Few had predicted a Liberal victory on this scale. They look set to win 184 out of 338 seats – 14 more than they need for a majority.

That represents a huge increase from only 36 that they had held after suffering their worst-ever election result in 2011.

They become the first party ever to move from third place in parliament to a majority in one election in Canada’s history.

Meanwhile, the left-leaning New Democratic Party (NDP) is on course to win 44 seats, less than half the number they held in the outgoing parliament.

As the results began pouring in, former Conservative Justice Minister Peter MacKay said: “A sea of change here. We are used to high tides in Atlantic Canada. This is not what we hoped for.”

Mr Trudeau campaigned on a promise of change, urging voters ahead of the polling day to “come together as a country”. Mr Trudeau’s charismatic father, Pierre, is considered the father of modern Canada.

Mr Harper, 56, portrayed himself as the steady hand who could steer Canada’s troubled economy back on track. His campaign ran TV advertisements saying that Mr Trudeau was “just not ready” to take office.

How to College Writing

Author syncmagPosted on February 4, 2013February 4, 2013
How cold is it? Cold enough that parking pay stations malfunctioned in certain spots downtown. A couple of hundred of them it turns out.Stationnement...
Read More
In-Sync
Author adminPosted on May 27, 2013
SAN FRANCISCO,– Amazon.com Inc has been given a security clearance by the US government that will make it easier for federal agencies to use...
Read More

Author adminPosted on November 20, 2013May 23, 2014
“There is no link” between charter and sovereignty, she says MONTREAL — Pauline Marois made the case for Quebec sovereignty on Sunday, arguing that...
Read More