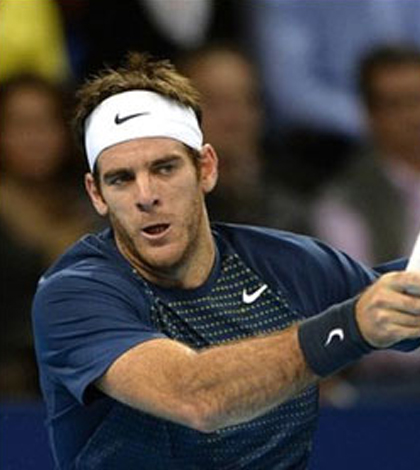 The re-run of last year’s title match, which ended with a similar result, took two hours, 20 minutes with Federer sealing his fate at the start of the third set, dropping serve as he delivered two double faults in the opening game.
The Swiss third seed had the chance to clinch his spot in the World Tour Finals starting in eight days’ time in London but will now have to wait until next week as the ATP regular season closes at the Paris Masters.
Del Potro now owns four titles this season and has defeated Federer in their last three matches.
The modest Argentine was apologetic in victory after beating the 17-time Grand Slam champion.
Federer fired 14 aces to no avail in the final as he failed to win what would have been just a second title in a disappointing season.
The 32-year-old was playing his eighth consecutive Basel final at the stadium where he got his start in the game as a ballboy nearly two decades ago.
He has played an overall 10 finals in Basel, winning five titles while he was bidding for his 78th career trophy from 113 finals.
Federer found himself on the back foot as Del Potro came up the early leader in the 54-minute opening set after breaking the Swiss but then losing his own serve a game later for a 5-4 lead.
As the opener went into a tiebreaker, Del Potro claimed a 4-1 lead before Federer got back into the chase, pulling to 3-5 but netting a forehand for three Del Potro set points. Only one was required.
Federer, loudly supported by an entire stadium of 9,200 fans, rallied in the second set to level with two breaks of the Argentine top seed.
But the Swiss star’s misfire in the opening game of the final set proved to be too much of a gap to overcome as Federer went down to defeat after a Del Potro 216kph ace set up match points.
The Argentine completed his afternoon after Federer saved the first.
Del Potro, already qualified for London, added Basel to his trophies this season in Rotterdam, Washington and earlier this month in Tokyo.
He now stands 48-13 on the season.

Smith Demands Respect For S Africa's Kings Of The Road

Author syncmagPosted on March 28, 2013May 7, 2013
DUBAI: Indian fast bowler Ishant Sharma has been fined 15 per cent of his match fee for breaching the ICC Code of Conduct during...
Read More

Author adminPosted on May 17, 2013
MADRID: Rafael Nadal sealed his fifth title in seven tournaments since returning from a seven-month injury layoff as he claimed a third Madrid Masters...
Read More

Author adminPosted on September 23, 2013
WARSAW: Australia are back in the Davis Cup World Group for the first time in six years, with Bernard Tomic supplying the crucial third...
Read More