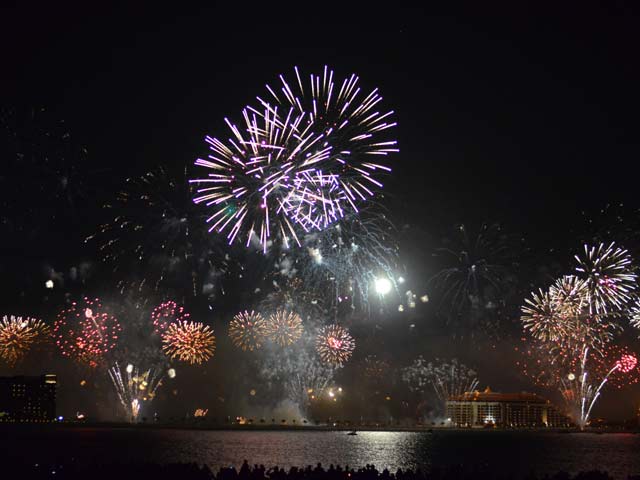 Dubai: Dubai shattered the world record for the largest ever pyrotechnic display on New Year’s Eve with a show involving more than half a million fireworks, Guinness World Records said on Wednesday.

“Ten months in planning, over 500,000 fireworks were used during the display which lasted around six minutes, with Guinness World Records adjudicators on hand to confirm that a new record had been set,” the Guinness website said.

The display spanned 94 kilometres (58.4 miles) of the Dubai coast, which boasts an archipelago of man-made islands and Burj Khalifa, the world’s tallest tower, Guinness said.

Enough fireworks were launched in the first minute of the display to break the previous record, set by Kuwait in 2011 with an hour-long show of 77,282 fireworks.

The main displays took place at Burj Khalifa and the luxurious Atlantis hotel located in Palm Jumeirah, one of three palm-shaped islands.

US firm Fireworks by Grucci designed the display, Guinness said, using 100 computers and 200 technicians to synchronise the pyrotechnics at a reported cost of around $6 million (4.3 million euros).

Dubai boasts the world’s tallest tower, its largest man-made island and one of the world’s busiest airports.

It set its latest record in May last year with Dubai, Princess Tower, recorded by Guinness as the world’s tallest residential building.

Dubai has been vying to become a permanent fixture on the world map of New Year celebrations, staging spectacular shows since the opening of the 828-metre (2,716-foot) Burj Khalifa tower in 2010.

Twelve Unusual Ways To Bring In The New Year

Author adminPosted on November 21, 2016September 14, 2017
The UK government is considering inviting US President-elect Donald Trump for a state visit, Downing Street has said. The Republican, who beat Democratic rival...
Read More
In-Sync
Author syncmagPosted on March 14, 2013April 11, 2013
New Delhi: The twin blasts in Hyderabad last evening in which 16 people died have revived a political controversy about the need for the...
Read More

Author syncmagPosted on May 6, 2013May 7, 2013
MANDI BAHAUDDIN: Ali Raza, 22, completed his three-year diploma in civil engineering with specialisation in road construction about two years ago, but he is...
Read More
In-Sync
Author syncmagPosted on March 19, 2013April 11, 2013
KARACHI: Geo has once again fulfilled its promises. In 2012, when the Emirates Airlines-sponsored super hit film “London, Paris, New York” was released, Geo...
Read More