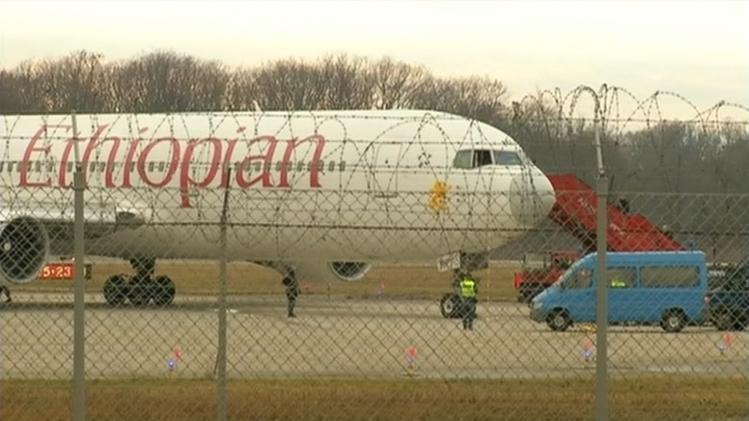 A hijacked Ethiopian plane that landed at Geneva airport early on Monday was diverted from Rome by the co-pilot, who sought asylum due to fear of persecution in Ethiopia, police spokesman Pierre Grangean told a news conference.

The unnamed co-pilot, an Ethiopian born in 1983, locked the cockpit door when the pilot went to the toilet. He then asked to refuel at Geneva, landed the plane, climbed down from the cockpit window on a rope, and gave himself up to police.

He was unarmed and there was no risk at any time to crew or passengers, Grangean said. The co-pilot is being questioned by police.

Passengers left the plane parked near the end of the runway and were checked by police as they held their hands on their necks, before boarding a bus, a Reuters witness said.

Flight ET 702 had been diverted from its original destination of Rome. The airline earlier said the flight from the Ethiopian capital Addis Ababa had been “forced to proceed” to Geneva.

State-run Ethiopian television said there had been 193 passengers on board the Boeing aircraft, including 140 Italian nationals.

The brief drama in Geneva on Monday morning caused the cancellation of some short-haul flights and some incoming flights were diverted to other airports. Hundreds of passengers booked on disrupted flights scrambled to change their tickets.

In an apparent recording of a radio communication between the aircraft and air traffic control posted on the social media site Twitter, a demand for asylum was made.

Reuters could not independently verify the authenticity of the recording and it was not immediately clear whether it was a hijacker or pilot speaking from the plane.

“We need asylum or assurance we will not be transferred to the Ethiopian government,” the voice in the recording said, posted by Twitter user @MatthewKeysLive.

A flight tracking app for mobile devices showed the flight circling over the Swiss city several times before landing.

Ethiopian nationals and the Horn of Africa country’s flag carrier have been involved in several hijackings in the past.

In 1993, an Ethiopian used a gun hidden in his hat to hijack a German passenger jet bound for New York. He was later sentenced to 20 years in a U.S. prison.

Two years later, police in Greece overpowered an Ethiopian hijacker who held a knife to the throat of an Olympic Airways stewardess and demanded political asylum.

At least 50 people were killed when a hijacked Ethiopian Airlines passenger jet crashed in the Indian Ocean in 1996. In 2001, a dozen Ethiopian students hijacked a plane carrying around 60 people and flew to Sudan.

Author adminPosted on September 8, 2015September 8, 2015
FORT WALSH, Sask. — One of Canada’s worst mass murders occurred in what is now a remote area of southwestern Saskatchewan, but experts say...
Read More

Author adminPosted on August 20, 2014August 20, 2014
Prime Minister Nawaz Sharif on Wednesday decided to meet opposition leader Imran Khan in an effort to end the anti-government protests here seeking his...
Read More
In-Sync
Author syncmagPosted on March 28, 2013April 11, 2013
ISLAMABAD: Serious doubts have been raised on the transparency of the election process at the initial stage as the returning officers across the country...
Read More

Author adminPosted on January 15, 2014May 23, 2014
Sending humans to Mars by the 2030s is affordable, a group of experts finds, but some key changes are needed if it is going...
Read More