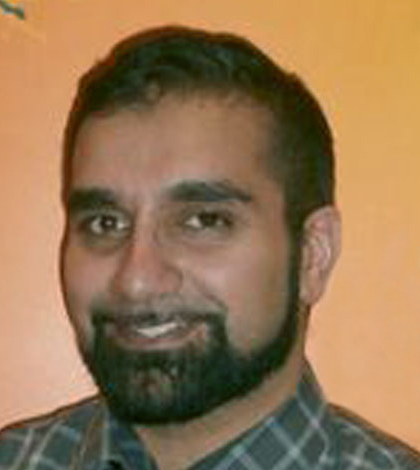 MONTREAL — A 32-year-old man, Saad Syed, was killed after being struck by a steel plate in front of a construction site at the corner of René Lévesque Blvd. and de la Montagne St. Monday morning.
Syed was walking on the sidewalk on the east side of de la Montagne just north of René Lévesque while the plate was being moved. The accident happened just after 8:40 a.m. when the chain holding the plate broke, police said.
Twenty minutes after the accident the man’s shoes, glasses and backpack were strewn across the sidewalk and street, along with medical gloves and first aid supplies.
Construction workers on site, their first day back at wortk after the construction holiday, told The Gazette that the steel plate, which measures 12 feet by 8 feet and is three-quarters-of-an-inch thick, is used to cover construction holes so that trucks can drive over them.
The workers estimate the plate weighs almost three tons.
A front-end payloader was moving the plate, suspended by a chain, when the plate broke free, hitting the man in the head. Witnesses told The Gazette they thought he died on impact.
After the accident the man was dragged out from under the plate by workers who tried to administer first aid before police and ambulances arrived.
“There was blood all over his head,” one woman said.
The driver of the payloader was treated for shock.
Urgences Santé personnel performed procedures on the man before he was rushed to the trauma unit of the Montreal General Hospital.
“When our medical technicians arrived the man was unconscious with a serious head injury,” said Robert Lamle, spokesperson for Urgences Santé.
“The technicians performed CPR on him and he was taken to the General, which is very close. They could do nothing for him (at the hospital) and he was declared dead.”
Mountain St. between Ste-Catherine and René Lévesque was closed to traffic in both directions for almost five hours and reopened at 1:45 p.m.
The CSST, the provincial workplace health and safety board, were on site immediately as this was a workplace accident. Inspectors from the CSST were busy testing and photographing the chain and the metal hook of the heavy plate for signs of weakness. The coroner’s office was also called in.
Pomerleau Construction, the company building the high-end condo project on land that was previously a parking lot, chose to shut down the site for the day out of respect for the victim and their traumatized employees.
“The CSST gave us permission to start up work after their inspection (was finished), but we decided to close for the day and are offering our condolences to the family (of this man),” said Pomerleau spokesperson Joel Rochon-Boudreault.
“Security remains our priority and we are doing everything to cooperate with the CSST, the police and the coroner.”
Rochon-Boudreault said psychological counselling will be available to any workers who ask for it and the subcontracted worker who was driving the loader will be evaluated by a trauma specialist.
In a twist of fate, the CSST issued a communiqué on Monday calling for prudence and safety on the work site. According to the figures compiled by the CSST, 42 per cent of all workplace accidents happen between August and November.
A spokesperson for GEOS Language Academy where Saad Syed taught issued a brief statement, saying the 32-year-old “will be greatly missed. He was a loving teacher that we all loved.

Author adminPosted on February 14, 2013
A broken water main sent water cascading down McTavish St., literally sweeping pedestrians off their feet. Several buildings on the McGill campus have been...
Read More

US Panel Votes For Better Oversight Of Drone Strikes

Author adminPosted on November 20, 2013May 23, 2014
WASHINGTON: The US Senate Intelligence Committee has quietly approved a plan to step up both public and internal government oversight of the use of...
Read More

Author syncmagPosted on February 4, 2013February 4, 2013
The latest buzz is that Rockstar babe Nargis Fakhri and Dhoom boy Uday Chopra are to set to get married this year. The rumour...
Read More
In-Sync
Author syncmagPosted on March 25, 2013April 11, 2013
MONTREAL: Two prisoners who staged a daring weekend escape from jail in eastern Canada using a hijacked helicopter have been re-arrested, authorities said on...
Read More

Author adminPosted on May 27, 2013
QUEBEC — The Quebec government has tabled legislation which could impose a moratorium on exploration for shale gas in the St. Lawrence River valley...
Read More
In-Sync
Author syncmagPosted on March 19, 2013April 11, 2013
PESHAWAR: The Pakistan Tehreek-e-Insaf (PTI) chief Imran Khan on Sunday criticised the Punjab government for the violence against Christians and said the Badami Bagh...
Read More