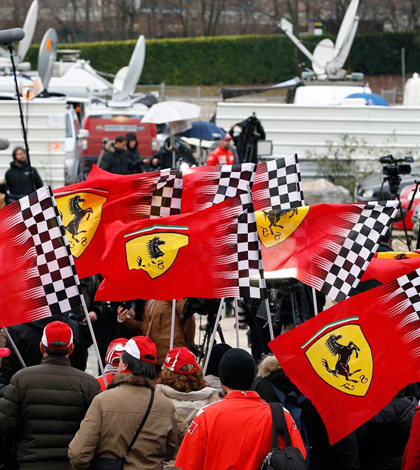 GRENOBLE, France: Fans of Michael Schumacher gathered Friday for a silent vigil for the Formula One legend’s 45th birthday as he lay in a coma in a French hospital after a weekend skiing accident.

Ferrari, which is bussing in scores of fans from Italy and France to the hospital in the Alpine city of Grenoble, put a special message on its website, saying “Forza Michael,” or “Go Michael” in Italian.

“He is tackling the most important fight of his life and therefore we want to send him very special wishes,” said Schumacher’s old team, as similar messages poured in from around the world.

The retired seven-time world champion slammed his head against a rock on Sunday while skiing in the French Alps and has had two operations to remove bleeding and pressure on his brain.
The accident shocked legions of fans used to seeing Schumacher cheat death on the race track.
He is being kept in an induced coma and in the latest health update given by his manager on Wednesday, his condition was described as stable but still critical.

His family is at his side, including his wife Corinna, his two teenage children, his father Rolf and brother Ralph, who is also a racing driver.
“Following Michael’s skiing accident, we would like to thank the people from all around the world who have expressed their sympathy and sent their best wishes for his recovery,” the family said in a statement.
“We all know he is a fighter and will not give up.”

Fans left a poster outside the Grenoble hospital saying “Schumi, All our Thoughts for You and Your Family.”

“Schumi has given us a lot in the past,” said 47-year-old accountant Stefano Pini, who arrived from Milan to pay tribute.

“The least we could do is to come here and support him and his family on his birthday.”

‘We want him to return to us’

“He is one of my greatest idols. We want him to fight and to return to us,” said French fan Gabriel Klose, who turned up with his 12-year-old son.

However, the Ferrari tribute has created controversy with some accusing the Italian racing giant — which asked fans to sport its trademark colour red and its insignia — of exceeding the limits of good taste.
The carmaker, which has 130 clubs in Europe, has provided about 20 coaches across Italy to bus in fans for the vigil.

But Roberto Luongo, president of the Roma-Colesseo Ferrari club, said he did not want to be associated with an event linked to “a man who is suffering”.
“It’s very delicate and if I was among those who are close to Michael, such an initiative would not have pleased me,” he said.

Schumacher’s fan club in his childhood town of Kerpen said any celebration of the birthday would be in bad taste.
There have been conflicting statements about the speed Schumacher was going when he crashed in the upmarket Meribel ski resort, where he has a property.

The impact as he hit a rock split his helmet in two, according to a source close to the investigation.
The hospital and Schumacher’s manager had briefed the press daily since the accident but on Thursday they said they would communicate only if there was something new to report.

His manager Sabine Kehm said Wednesday that Schumacher was stable though still critical.
The hospital has faced frenzied media and public interest in its famous patient and a a vacant lot nearby has been turned into an impromptu parking area for television satellite vans.
Kehm said earlier this week that some people had tried to sneak into Schumacher’s room, one dressed as a priest.

Questions have emerged over exactly how the accident happened on a small, seemingly innocuous off-piste section of Meribel located between two ski slopes — one classed as easy and the other as intermediate.
Prosecutors are looking at whether the limits of the pistes next to the accident site were correctly marked, and whether the safety releases on Schumacher’s skis operated properly.

Schumacher, who made his debut in 1991, dominated Formula One during his career, winning more world titles and races than any other driver.
He first retired aged 37 but was unable to resist the lure of the track. In 2010, he came out of retirement but was unable to recover his previous performance and quit for good in 2012.

Author adminPosted on September 23, 2013
Former India fast bowler Shanthakumaran Sreesanth has been banned for life on spot-fixing charges, the Board of Control for Cricket in India (BCCI) said...
Read More

Author syncmagPosted on March 28, 2013May 7, 2013
DUBAI: Indian fast bowler Ishant Sharma has been fined 15 per cent of his match fee for breaching the ICC Code of Conduct during...
Read More
Sync Sports
Author syncmagPosted on March 19, 2013April 11, 2013
NEW DELHI: Indian police said Sunday it will question Olympic bronze-medalist boxer Vijender Singh over alleged links to a man who was arrested after...
Read More