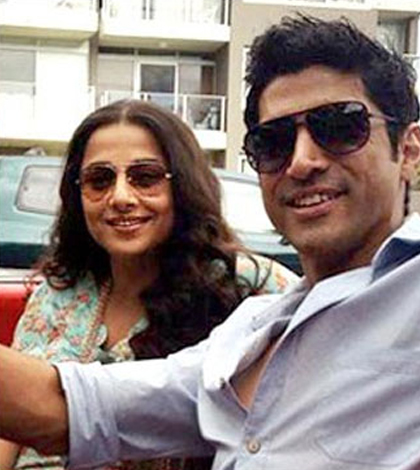 The very moment Saket Chaudhary announced that the sequel to his hit flick Pyaar Ke Side Effects titled Shaadi Ke Side Effects starring Vidya Balan and Farhan Akhtar, it raised may eyebrows at the unusual pairing.
However seeing the chemistry between Farhan and Vidya one is convinced that Saket surely has a winning lead pair combination for this film.
Farhan and Vidya were seen shooting for a film sequence in a classic car red Cadillac. Vidya has donned a completely different look for this film. Vidya and Farhan were recently spotted shooting for a very special romantic track from Shaadi Ke Side Effects in Queensland, Australia
The film’s producers Pritish Nandy Communications (PNC) had tied up with Tourism Australia (TA) in partnership with Tourism and Events Queensland (TEQ) for filming the soundtrack in Queensland. Talking about this, PNC’s Rangita Pritish Nandy said, “We all know how important songs are to a Bollywood movie and what better destination than Queensland, Australia to shoot a very special romantic track. With the support of Tourism Australia, Tourism & Events Queensland and Tourism Gold Coast, we’re keen to capture the excitement, magic and romance of Australia on celluloid like never before.”
Shaadi Ke Side Effects is due to be released worldwide in December 2013.

Author adminPosted on February 21, 2014May 23, 2014
Warner Bros. pushed back the release date of the still untitled film that will bring together superheroes Superman and Batman, delaying it by almost...
Read More

Author adminPosted on February 21, 2014May 23, 2014
Latest reports suggest that Shahrukh Khan has decided to release his Raees on Eid 2015. Usually Salman Khan claims the lucrative Eid period for...
Read More
Sync Tainment
Author syncmagPosted on March 19, 2013April 11, 2013
CHRISTOPHER Maloney has finally opened up about his sexuality – admitting he is gay. Asked straight out if he was homosexual, the X Factor...
Read More

Author adminPosted on October 23, 2013
Though the Kapoor lad is playing a supporting role in the film, he says the film belongs to its lead actors Ranbir Kapoor will...
Read More
Sync Tainment
Author syncmagPosted on March 19, 2013April 11, 2013
Malaika Arora Khan is known to be quite humble and down-to-earth. So when we heard the actress created a scene at a recent event...
Read More