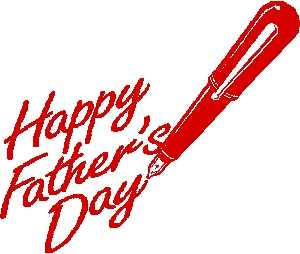 Father’s Day is a secular celebration inaugurated in the early twentieth century to complement Mother’s Day in celebrating fatherhood and to honor and
commemorate fathers and forefathers. While many people believe that Father’s Day is a holiday invented by the fine folks at Hallmark, it’s not so. The driving force behind the establishment of the celebration of Father’s Day was Mrs. John B. Dodd, of Washington State, who first suggested the idea of the holiday in 1909.

Mrs. Dodd’s father, civil war veteran William Smart, was widowed when his wife died during childbirth with their sixth child. Despite the obvious hardships, Mr. Smart proceeded to raise the newborn along with his five other children, by himself. It wasn’t until Sonora Dodd became an adult that she realized the strength and selflessness her father had shown in raising his children as a single parent.
The original date chosen for the holiday was June 5, Mr. Smart’s birthday, however the celebration was postponed until June 19, the third Sunday in June, because there was not enough time to prepare. At about the same time in various towns and cities across America other people were beginning to celebrate a Father’s Day. Some accounts credit Mrs. Charles Clayton of West Virginia, as the founder of Father’s Day, although most histories give credit to Mrs. Dodd.
In early times, wearing flowers was a traditional way of celebrating Father’s Day. Mrs. Dodd favored the red rose to honor a father still living, while a white flower honored a deceased dad.
J.H. Berringer, who also held Father’s Day celebrations in Washington State as early as 1912, chose a white lilac as the Father’s Day Flower. In 1924 President Calvin Coolidge supported the idea of a national Father’s Day, but it never became official until 1966 when President Lyndon Johnson signed the presidential proclamation that set aside the 3rd Sunday of June as Father’s Day.

10 Reasons Your Dad Deserves His Own Day

1. He’s Your Hero
Serving as a larger-than-life role model, a boyfriend-screener, and an all-knowing Confidant, Dad always has the best advice and a comforting shoulder to lean on.
2. Dad’s taking Out the Trash? Again
Dad gets stuck with chores no one else wants – he mows the lawn, takes out the garbage, walks the dog, and shovels the snow. If that’s not enough, he’s also the handyman and official spider-killer.
3. He’s Ready for a Good Time
Even when Mom refuses, Dad will join you on the scariest roller coaster, in the creepiest haunted house, or down the steepest ski slope – and love every minute of it.
4. The Father of the Bride
Dad is always by your side, and never prouder than on your wedding day.
5. Dad Is Your Number One Fan
Nobody thinks you’re smarter, more beautiful, or funnier than your dad. Well, maybe your mom, but it’s a pretty close tie.
6. He Can’t Say No
Dad let you eat ice cream for breakfast, stay up an extra hour, and keep that puppy you brought home.
7. You’ll Always Be Daddy’s Little Girl
No matter what adult responsibilities are on your shoulders, Dad is there to rescue you, a comfort you appreciate at any age.
8. He Believes in You
Dad gave you the confidence to be your own person, to reach for the stars, and to never take no for an answer.
9. He’s a Good Sport
Dad wouldn’t just take you to the baseball game — he’d make sure your glove got autographed, too.
10. Dad Lets Mom Have the Rest of the Year
The recognition usually goes to Mom, but Dad is always happy to give her the spotlight.

Father’s Day Gifts Ideas:
For the Dad Who Has Everything

Struggling to pick out the perfect Father’s Day gift? Well your man-of-the-year is sure to love one of these gift ideas.

• Framed Photo Collage:
This gift is really for every dad out there. Who doesn’t love remembering all the great times you’ve had together? Start out by buying a large frame with a matte that can hold lots of different-sized pictures. Then, start combing through the family photo albums and files of digital pictures to put together a collection of your happiest memories together. Don’t forget to include family vacations, graduations, birthdays and holidays. Plus, remember that time we all just sat around the dinner table making funny faces at the camera? Put one of those in too. To make it extra special, let the kids decorate the matte with markers and scrap-booking stickers.

• One Day Free Pass:
This is one for the dad who rarely gets time alone to sit on the couch, work on his model train, or do whatever it is that your special guy wishes he still had time to do. Create an official looking certificate that dad can redeem for one full day of an empty house where he doesn’t have to take care of any kids, do any chores, or do anything he doesn’t feel like doing. You’d be surprised at how badly he’s been wishing for this gift!

• Home Movie:
Is your dad all about creativity? Gather together the kids, their favorite instruments, songs, poems, costumes and magic tricks and put together a special home movie just for dad.

• Tickets to the Big Game:
Whether your dad is into baseball or car-racing, score him a pair of tickets to his favorite event. While this may not have the originality of a home movie, it’s sure to please the sports fanatic in every family.

• Autographed or First Edition Book:
For the intellectual dad who loves to read look for an autographed or first edition book by one of his favorite authors.

• Cooking Classes for the Home Chef:
If your dad loves whipping up new dishes and trying out new flavors, consider buying him a special cooking course for a new type of cuisine.

• Donation to his favorite charity:
When you think of your man of the hour, does the word ‘activist’ come to mind? If so then this is truly the gift for the man who has everything and now wants to share it with the world.
There really is no one perfect gift for all dads everywhere, but knowing who your dad is and what he likes is the first step to finding that perfect Father’s Day gift that will remind him of how much you love him all year long.

Author syncmagPosted on May 17, 2013May 17, 2013
For some people, this is a truly radical idea: There is no need to fight with your partner. Ever. Accusations, recriminations, character assassination, threats,...
Read More

Author adminPosted on August 5, 2013August 5, 2013
• Eat A Green Dinner No, your food doesn’t have to be all green — although that would be pretty impressive! Stop at the...
Read More

Questions to Ask before Breaking-Up

Author adminPosted on October 24, 2013
What do you need to think about before calling it quits? The experts weigh in. 1. Do I have a hard or a soft...
Read More

Author adminPosted on February 4, 2014May 23, 2014
1. Time-out While there are many couples who like to resolve their issues before calling it a night, even if it keeps them up...
Read More

Bonding Tips: How to Be a Happy Family

Author adminPosted on September 23, 2013
A family that eats together stays together. You must have heard the adage several times, but what is it that actually keeps a family...
Read More