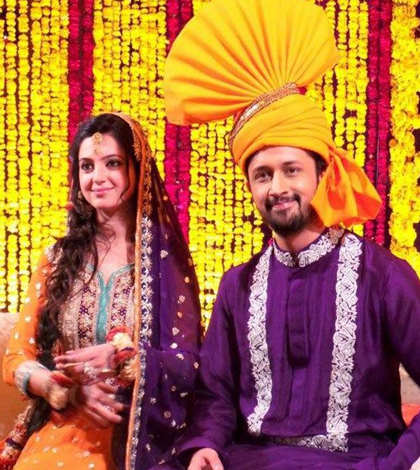 They got hitched! Yes, these celebrities from tinsel town walked down the aisle to their happily ever after in 2013. Some chose high-profile ceremonies, others decided to keep their wedding a hush-hush affair. And it was not just celebrities from Bollywood and Hollywood who got married this year. 2013 also saw some of the most popular cricketers tie the knot. Here’s a look at the celebrities who got married in 2013.

1. S. Sreesanth: Looks like controversies did not ruin the cricketer’s wedding plans. S. Sreesanth got married to his long-time girlfriend Nain December 12 at Guruvayur temple. The bride hails from a royal family in Jaipur and is a jewellery designer by profession.

2. Sayali Bhagat: It was an arranged marriage for the former Miss India and actress. Bollywood actress Sayali Bhagat married Delhi-based entrepreneur Navneet Pratap Singh at a grand ceremony in Mumbai on on December 10.

3. Diana Hayden: It was a Vegas wedding for former Miss World Diana Hayden. The beauty queen got married in Las Vegas to her boyfriend Collin Dick this September. He works for an international NGO in Mumbai.

5. Shweta Tiwari: The Kasautii Zindagii Kay actress got married for the second time to long-time boyfriend, actor Abhinav Kohli in a low-key affair in July. The who’s who of the TV industry were spotted at Shweta Tiwari’s wedding.

6. Keira Knightely: Hollywood actress Keira Knightley walked down the aisle with beau James Righton in May this year. She wore a powder pink Chanel haute couture gown with a white blazer and ballerinas.

7. Atif Aslam: Pakistani singer Atif Aslam married his long time girlfriend and fiancée Sara Bharwana on March 28, 2013. According to reports, the singer had a low key wedding ceremony in Lahore.

8. Ahmed Ali Butt: The famous comedian actor and singer of Pakistan tied knot with his longtime friend, Fatima Khan in March this year. Ahmad Ali Butt is the grandson of Madam Noor Jehan, he is the son of Zille Huma.

9. Mehreen Syed: Pakistani supermodel, the CEO of of IFAP and an actor, Mehreen Syed married Ahmed Humayun Sheikh in a Nikah ceremony in Lahore on the 23rd of February. Sheikh is the son of Hamayoun Shaikh, who owns the luxury fashion house and is a successful businessman himself.

10. Shonali Nagrani: Former Bigg Boss contestant Shonali Nagrani tied the knot with her boyfriend Shiraz Bhattacharya in February this year. Shonali is a cricket and entertainment television presenter. The couple chose a destination wedding in the coastal state of Kerala, and saw friends from showbiz attend the do.

Author adminPosted on February 17, 2016
Explore the highlights of the Hollywood Bowl 2016 summer season. It may only be February, but it’s time to start plotting your tickets for...
Read More

Author syncmagPosted on February 4, 2013February 13, 2013
“Race 2” is a Bollywood action thriller film directed by Abbas-Mustan and produced under the Tips Music Films banner and is the first major...
Read More