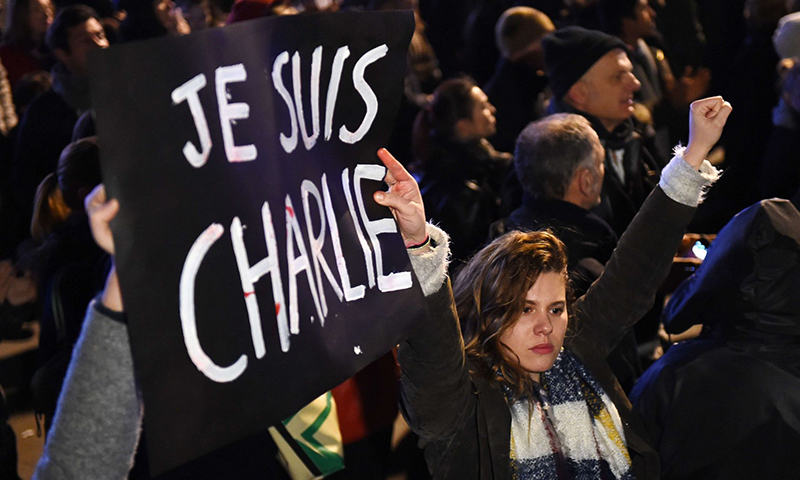 PARIS: Notorious French comedian Dieudonne was arrested Wednesday for being an “apologist for terrorism” after writing a Facebook comment suggesting he sympathised with one of the Paris attacks gunmen, a judicial source said.

Prosecutors had opened the case against him on Monday after he posted “Tonight, as far as I’m concerned, I feel like Charlie Coulibaly” — mixing the popular slogan “Je Suis Charlie” used in homage to the journalists killed at magazine Charlie Hebdo, with a reference to gunman Amedy Coulibaly.

Coulibaly killed four people at a Jewish supermarket on Friday and a policewoman the day before.

The comedian made international headlines in 2013 when French footballer Nicolas Anelka was banned for five matches by English football authorities for using a hand-gesture created by Dieudonne that many people consider anti-Semitic.

Dieudonne made his controversial Facebook post after attending Sunday’s unity march against extremism that brought more than 1.5 million people onto the streets of Paris in the wake of the attacks.

He described the march — considered the biggest rally in modern French history — as “a magical moment comparable to the big-bang”.

The government has in the past banned Dieudonne’s shows because it considers them “anti-Semitic”.

In response to the interior minister’s comment, the comedian said the government was trying to “ruin my life” when “I am only trying to make people laugh”.

He has removed the offending remark from his Facebook page.

2015 election: Women make up less than a third of candidates so far

Author syncmagPosted on May 6, 2013May 7, 2013
Legendary singer Shamshad Begum, one of the first playback singers in the Hindi film industry and voice behind hit songs like ‘Mere Piya Gaye...
Read More

Author syncmagPosted on May 17, 2013May 17, 2013
LAHORE: Pakistan Tehreek-e-Insaf (PTI) has formed a four-member committee to negotiate with other political parties and independent candidates to form government in Khyber Pakhtunkhwa...
Read More

Author adminPosted on October 24, 2013
ISLAMABAD – In the light of Supreme Court judgement regarding National Reconciliation Ordinance (NRO), an accountability court has reopened six references against former President...
Read More
In-Sync
Author adminPosted on January 15, 2016January 15, 2016
Washington: Twitter Inc is being sued by the widow of an American killed in Jordan who accuses the social media company of giving a...
Read More