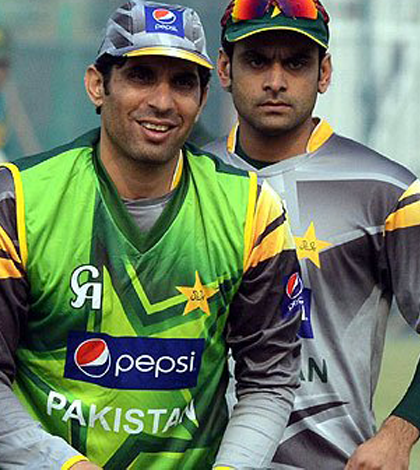 Pakistan’s Twenty20 captain Mohammad Hafeez on Tuesday showered praise on Test and One-day captain Misbah-ul-Haq for his fine leadership qualities and said his commitment with the game was exemplary.“He (Misbah) is a calm, honest, dedicated person with great leadership qualities,” Hafeez told reporters in a post match press conference after SNGPL beat HBL by eight wickets in the first semi-final of President’s Cup at the National Stadium.
“Misbah performs his job with great dedication and is mentally very strong,” he said. “He (Misbah) is a very committed cricketer whether he is playing in domestic circuit or at the international level,” added Hafeez.It was just last week that both Hafeez and Misbah had held a joint press conference to deny any differences between the two players during the South Africa tour after former PCB chief Ijaz Butt had accused Hafeez of conspiring against Misbah.On Tuesday, Hafeez repeatedly stressed on improved playing conditions in Pakistan and said good bouncy tracks should be prepared in domestic matches in order to groom the batsmen for tough conditions in Australia and South Africa.Hafeez further said that holding of the President’s Cup one-day event could be a good build up for the players before the Champions Trophy scheduled to be held in England from June 4. “Playing under rules with two new balls from both ends is good preparation and experience for our players.

Author adminPosted on February 3, 2014May 23, 2014
LAHORE: In the winter of 2011, Antonela Maria Obreja visited Pakistan for the first time. So impressed she was by the standard of the...
Read More