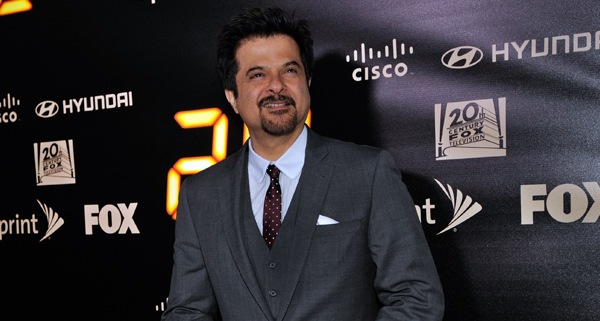 An audience member pre question remarked to Anil Kapoor, “I keep get older and you keep get younger.” Laughter all around, the statement was indeed as potent as it gets. Encapsulating Kapoor’s effervescent charm and enigma all in one masterstroke.
Thirty four years strong into an industry where the tide changes every Friday, Anil Kapoor has been an exception to the norm. He has been able to toe the fine line and do the commendable balancing act between commercial and ‘off-beat’ cinema without much fuss at all.
Kapoor in his entire splendor was present at the TIFF Bell Lightbox in Toronto on Monday night to talk cinema, life and insights from his journey in filmdom.
On a day considered to be the most depressing of the year and a chilly one at that Kapoor infused some element of warmth into the proceedings. Even willingly stepping back out to take photographs with the audience was the session had wrapped, at which point he was naturally swarmed by the anticipant crowds.
“Two of the biggest filmmakers, Subhash Ghai and Feroz Khan decided to cast me for their next films – Janbaaz and Meri Jang on the night of Mashaal’s premiere. I went to my wife who was my girlfriend at the time, we had been together for ten years then and forty years now – I proposed to her and said ‘Now nobody can stop me.’”
“It was important for me to be successful before I proposed marriage. You can’t live on just love and fresh air. When I felt that I would be able to look after her and buy a house for our family that’s when I proposed, otherwise if I wasn’t going to be a success I assure you I wouldn’t have got married to her.”
Slumdog Millionaire broke open the doors of Hollywood for Kapoor. The role of the game show host who made it big from humble beginnings also had a personal connect with him.
“I remember when I met Danny Boyle went through the script and started working on the role, I told him I can identify with Jamal because I was Jamal when I started my career. I could really feel for him. I came from humble beginnings and became like Prem (his character name in Slumdog).”
On his upcoming ventures Kapoor said, “Race 2 releases this Friday. It is a commercial mainstream typical Bollywood film. Then there’s Shootout at Wadala in which I play a real life character and I am also making 24 in India, I play Jack Bauer.”

Author adminPosted on November 20, 2013May 23, 2014
Say hello to the new Guess girl: Priyanka Chopra. The Bollywood star and former Miss World has been tapped by the brand to front...
Read More
Sync Tainment
Author syncmagPosted on March 14, 2013April 11, 2013
Mumbai: From a lanky loverboy in ‘Phool Aur Kaante’ to the very dangerous Sultan in ‘Once Upon A Time in Mumbaai’, Ajay Devgn has...
Read More

Author adminPosted on January 20, 2014May 23, 2014
The Screen Actors Guild on Saturday announced winners of its annual awards for best performances in film and television in a televised ceremony in...
Read More
Sync Tainment
Author syncmagPosted on March 25, 2013April 11, 2013
Aishwarya Rai and Abhishek Bachchan’s little baby Aardhya Bachchan is growing up very fast. Not just her height, but little Aaradhya’s mind is pretty...
Read More