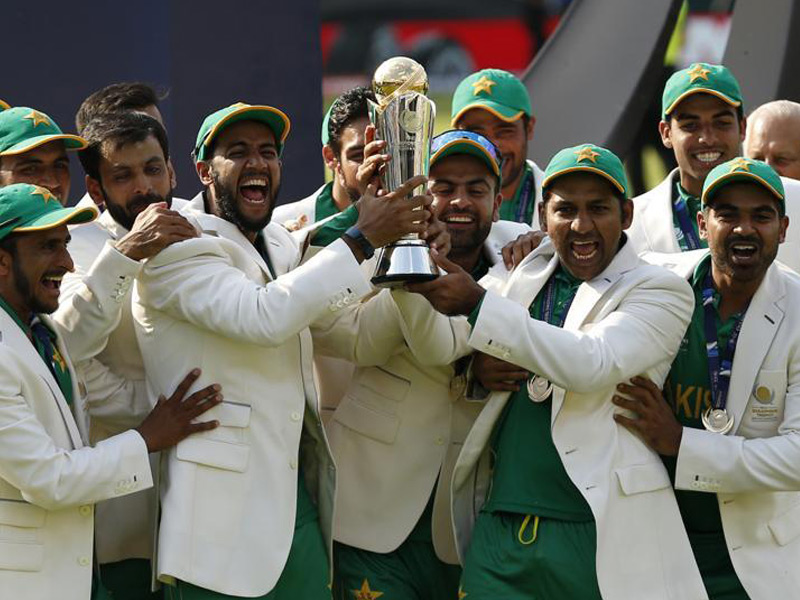 It was a major victory for Pakistan who won the Champions Trophy for the first time in their history. To make it even more special, they defeated their arch-rivals India by 180 runs to claim the trophy. It was a dream movement for the team who got beaten by the defending champions India in their opening game by 124 runs. Pakistan destroyed India in the 2017 ICC Champions Trophy final as they collected victory by 180 runs Sunday. India’s mighty batting order collapsed after their opponents posted 338 for four in their opening knock. The Indians could only manage to score 158 runs in an easy win for the new champions.
Pakistan was put into bat by India as the favorites expected to create a run chase they were comfortable with. However, things turned sour for the Indians as their opponents produced the best batting display of the tournament.

The Win Of The Unpredictable Pakistan Thrashing India To Historic Win

Fakhar Zaman and Azhar Ali’s century stand for the opening wicket put Pakistan in the driver’s seat after Virat Kohli opted to bowl first in the high-voltage clash. It was vital for Pakistan to post a big total and they did it with the help of Mohammad Hafeez’s cameo at the end. Zaman took risks here and there did not allow the Indian spinners to settle by taking risks and due to that India was not able to pick wickets in the middle overs.
India lost their two key batsmen – Rohit Sharma and Kohli early in the big chase and then never came back into the match as they kept on losing wickets regularly.Hardik Pandya tried to show some fight but he was run out when he was set for a century, and Pakistan won the final by a mammoth 180 runs the largest winning margin in the final of an ICC tournament. This was also Pakistan’s biggest winning margin by runs over India in ODIs. In many ways, Pakistan’s rise from No. 8 in the ICC ODI rankings to its maiden ICC Champions Trophy title captured the very essence of the tournament. At almost every press conference leading up to the tournament, the general accord was that the Champions Trophy was one tournament where there were no favorites, and that all teams had an equal chance.
As things turned out, it wasn’t just lip service, the most incredible example being the Pakistan story. After a demoralizing loss to India in its opening game, the least fancied and lowest ranked team in the competition stunned South Africa and sneaked past Sri Lanka to make it to the knockout stages. If that was impressive,
what followed was staggering: Pakistan destroyed England and India in its next two matches to complete its dream run. But the Pakistan fairytale was just one part of the story. The ICC Champions Trophy 2017 showed that it is a great leveler as there were plenty more unpredictable results. Pakistan recorded the most glorious and momentous win against the most rivalry team India and Pakistanis could not be happy anymore. Overall ICC event was quite a thrilling and exciting one as there were many unpredictable wins and losses but nobody wondered the most unpredictable Pakistan team could beat the bush and stand like a champion.

HAPPY VICTORY TO THE CHAMPIONS PAKISTAN !

The Celebrations Of 150Th Canadian Anniversary

All the Simple How you can Craft Doggy Dissertation Tactic

The Purpose of Ramadan

“I Won’t Be Retiring, Not For A Long Time,” Clarke Says

Author adminPosted on November 20, 2013May 23, 2014
SYDNEY: Australian captain Michael Clarke has dismissed the idea of being driven into retirement by a degenerative back problem and believes he could play...
Read More