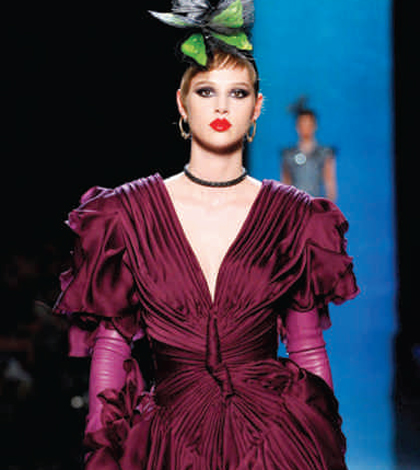 Paris Fashion Week is one of the most anticipated fashion events of the year. Recently we were able to see a lot of new creations by famous designers presented in a series of shows in the French capital.
What’s also interesting to be noticed is that the new fashion shows tend to be “shows” by themselves. There are a lot of elements present that do not necessary constitute the subject of fashion design, the set and decor for example. We are featuring few designers from the show in our report.

“Life is a butterfly! So all the collection is that!” explained Jean Paul Gaultier during a preview on the eve of his couture show, which used the simple metaphor and seemingly single idea to build a collection that proved to be brimming with playful reinterpretations of those winged beauties and rich with inventive technique and craftsmanship.
Gaultier always makes for one of the most exciting couture shows of the season— admired in equal measure for their celebrity appearances as for the endearing positive energy the designer personally exudes.
The best looks, like one single orange coral butterfly blouse whose little organza ruffles seemed to flutter, were often the simplest.

LA FEMME
Author syncmagPosted on March 25, 2013May 17, 2013
MARIA.B DESIGNS (PVT) LTD is the largest manufacturer and retailer of women’s fashion garments in Pakistan, with a large clientele in the US and...
Read More

Author syncmagPosted on May 6, 2013May 17, 2013
Paivand Embellished The Outfits With Various TypesOf Embroidery, Pipins, Lace And Button. The Patch Work Is Also Used That Make The Most Beautiful And...
Read More

Author adminPosted on December 11, 2014December 11, 2014
Fashion label Teena by designer Hina Butt is set to showcase its new bridal collection “Mandana; The Ever Lasting Queen of Persia” on the...
Read More

Author adminPosted on February 7, 2014May 23, 2014
Paris Fashion Week is one of the most anticipated fashion events of the year. Recently we were able to see a lot of new...
Read More

Author syncmagPosted on February 4, 2013May 17, 2013
Thirty four of Pakistan’s best and emerging fashion designers gathered in London’s Garden for two days November2012 to show off some of the best...
Read More
LA FEMME
Author syncmagPosted on March 15, 2013May 17, 2013
It’s almost start of spring;winter’s out, lawn’s in season. These days Lawn dresses are top searching and top selling stuff in the market. The...
Read More