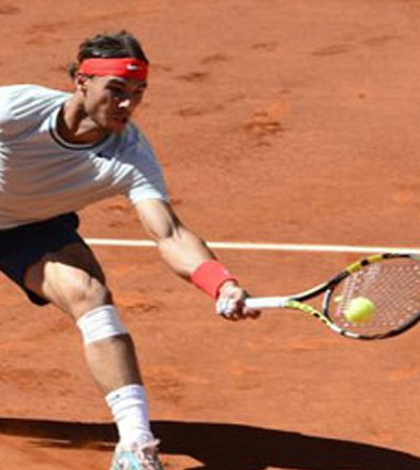 MADRID: Rafael Nadal sealed his fifth title in seven tournaments since returning from a seven-month injury layoff as he claimed a third Madrid Masters title with a 6-2, 6-4 win over Stanislas Wawrinka on Sunday.

Nadal now has 55 career titles with 40 coming on clay, an astonishing record that prompted Wawrinka to describe the Spaniard as a “killer” on clay courts.
Nadal, who holds a 9-0 career record over Switzerland’s Wawrinka, rolled through the first set thanks to two early breaks in little over half an hour.
And after a little more resistance from Wawrinka in the second, Nadal broke again to go ahead 4-3 before serving out to claim his 23rd Masters Series title.
“I played my best match of the week in the final,” said Nadal, who looks set to be the overwhelming favourite for a record eighth French Open.
“I started very aggressively and my movement was very good. I managed to get the double break and that is almost the set, especially here in Madrid with the altitude where the service does more damage.
“Stan is a player that plays with very good angles so at a tactical level I played very well and obviously tennis-wise it was very good as I suffered very little on my own serve.”
The Spaniard believes his performances towards the end of the week are the best he has produced on the European clay this year and he is now targeting the defence of his title at the Rome Masters next week.

Author syncmagPosted on March 28, 2013May 7, 2013
LONDON: Brazil coach Luiz Felipe Scolari marked his return to Chelsea by insisting Roman Abramovich should have given him more time to mark an...
Read More

Author syncmagPosted on May 13, 2013May 13, 2013
ISLAMABAD: Aamir Atlas on Sunday signalled the return of the golden days of Pakistan squash with an impressive straight sets win over Kuwait’s Abdullah...
Read More