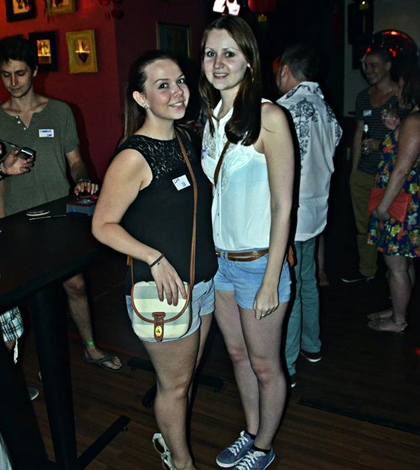 Date of Event Friday 24th January
Recognized as one of the World’s Top Tourist Destinations, Kuala Lumpur isn’t too shy off being the City that Never Sleeps, well known for its vibrant Night Life and Year Round Entertainment.
Last Friday Night at THE ROOF, one of KL’s latest Hot Spots featuring five different venues within had the floors packed with some of Malaysia’s most Gorgeous Women, Celebrities, local and international Entertainers for the FHM’s Most Wanted Women’s’ Party. When the queue at the entrance runs a mile long before 11p.m, (the usual time for most people to be exiting the house) it’s bound to be a BIG NIGHT and it surely was!
The extravagantly stunning FHM Ladies were definitely the core of the attention but the heart pounding entertainment fell nothing short. KL’s own Super Model DJ, Patricia Sue-Lin warmed up the decks with her signature tech and vocal house tracks!
The Highlight of the night however was the International Act, Half American Half Japanese, all the way from San Francisco, California, a star studded universal name among the Female DJ Industry playing alongside with renowned names such as ATB and Cosmic Gate, DJ Miki Taka!
Her 4th time in Malaysia, the person behind her continuous call-backs can’t go untold, and that is the Man who has extricated himself within the Entertainment Industry, setting an avenue of Female Artists performances, Gary Leow, C.E.O and Founder of his palatial triumph, Red Fusion Asia! Starting his endeavours of touring with International Female acts within Malaysia, it didn’t take Gary long to venture out to all around Asia, including China, Thailand, Vietnam, Singapore, Philippines, Hong Kong and Indonesia. Gary Leow along with his Company Red Fusion Asia capturing his niche in the entertainment Industry is a name not to be forgotten and is not bound to slow down anytime soon!

Author adminPosted on August 5, 2013August 5, 2013
Oh to be called lovely! Isn’t that what every woman wants? Read this adorable article and you’ll be well on your way to being...
Read More

Author adminPosted on November 2, 2016September 14, 2017
Good Stance: The way you carry yourself represents your personality. People with slumped shoulders and sluggish movements display a lack of self confidence. They...
Read More
Sync Potpourri
Author adminPosted on April 17, 2013
You’re a busy person, right? You want your time at the gym to be well spent, not wasted on exercises that won’t get you...
Read More

Twelve Unusual Ways To Bring In The New Year

Author adminPosted on December 31, 2013May 23, 2014
NEW YEAR TRADITIONS ACROSS THE WORLD: Around the world, people ring in the New Year with their own traditions. Countries around the world hold...
Read More