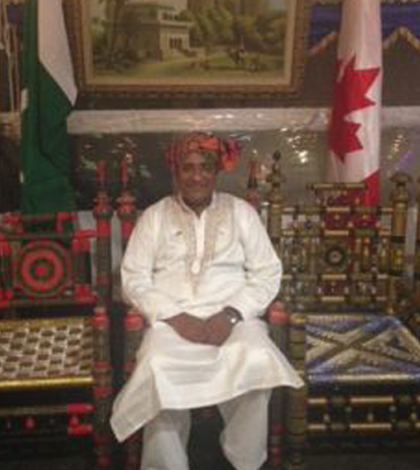 MONTREAL: Alnoor Sayani, the owner of the popular Lahore Tikka House on Gerrard St. E. in Toronto’s Little India community died of heart failure on Nov 6. He was 48.
“He was one of the most creative and business-minded people,” said Muhammad Saleem, who knew Sayani for 22 years and operated a grocery store across the street for 17 of them.
“He used to sell barbecued corn on the street. He used to sleep in his car. He didn’t have a house. He started the restaurant and started building slowly, slowly,” Saleem said. “He created a legacy for himself.”
A Ugandan immigrant of Pakistani descent, Sayani came to Canada by way of England when his parents fled Idi Amin’s brutal regime.
Sayani arrived in Canada at 15 with nothing in his pockets, said longtime friend and Ward 30 councillor Paula Fletcher, who was notified by restaurant staff that their “beloved boss” had died.

Sayani opened Lahore Tikka House in 1996 with just a few tables, according to a Heritage Toronto report. It quickly became a hub for the South Asian community, and over the years transformed into an authentic Pakistani experience and neighbourhood icon.
“He was a real gem of a man,” said Shahid Hadi, who met his future wife at the Lahore Tikka House and brought his family there to dine whenever they visited from Pakistan. They were always impressed with the food’s authenticity, but more so by their gracious host.
Sayani took his role in the community seriously. He hired many Pakistani people to work in the dining room and kitchen. He promoted Pakistani holidays, like Independence Day in August and Pakistan Day in March.
Lahore Tikka House was the scene of countless festivals and celebrations, Chintaluri said.

Sayani leaves behind a wife, Gulshan, and two children. The restaurant was closed Nov. 6. but has since reopened.
A funeral is scheduled for 9 a.m. Nov. 9 at the Scarborough Jamatkhana, 695 Middlefield Rd.

Author adminPosted on August 26, 2015September 17, 2015
LAHORE: The annual meeting of officials of the Pakistan Rangers and Indian Border Security Forces (BSF) will be held on September 09 to 13...
Read More

Author adminPosted on September 17, 2015September 17, 2015
ALMATY: Security forces in Tajikistan said on Wednesday they had tracked down and killed the country’s former deputy defence minister who had been charged...
Read More

Author adminPosted on September 17, 2015
SANTIAGO: A magnitude 8.3 earthquake struck off the coast of Chile on Wednesday, killing at least five people and slamming powerful waves into coastal...
Read More

Author syncmagPosted on January 16, 2013January 17, 2013
Do I hear Imran Khan fans disagreeing? Ah yes, it’s the tsunami they will unleash that will wipe out the world we know and...
Read More
In-Sync
Author adminPosted on May 27, 2013
SAN FRANCISCO,– Amazon.com Inc has been given a security clearance by the US government that will make it easier for federal agencies to use...
Read More

Author syncmagPosted on February 14, 2013February 14, 2013
Tehreek-e-Minhajul Quran chief DrTahirulQadri will move the Supreme Court within one or two days for removal of all provincial election commissioners and the discretionary...
Read More