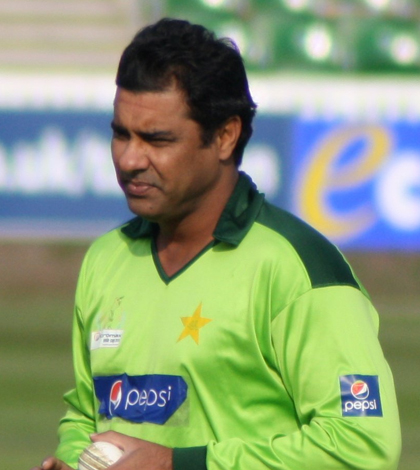 DUBAI: Legendary Pakistan fast bowler Waqar Younis said on Sunday it’s impossible to legalise ball tampering and wanted uniformity in the rules while punishing the offending players in international cricket.
South Africa’s Faf du Plessis escaped with just a fine of 50 per cent of his match fee for ball tampering that put a blot on the Proteas thumping an innings and 92-run victory in the second Test against Pakistan on Saturday.
“If you legalise ball tampering … there will be a lot of swing so I don’t see legalising tampering is possible,” former Pakistan Waqar said.
Waqar was the first player to get a suspension from one ODI for ball tampering during 2000. He took 373 wickets in 87 Tests and another 416 in 262 One-day Internationals before retiring in 2003. He formed Pakistan’s lethal pace attack with Wasim Akram in the 90s and was also famous for bowling toe-crushing yorkers.
In the past former bowling greats like Pakistan’s Imran Khan and Richard Hadlee from New Zealand had said that ball tampering should be legalised.
But Waqar said he couldn’t understand how it could be done.
“How can you legalise tampering?” Waqar asked. “I think Richard Hadlee, Allan Donald and Imran Khan also said that, but I don’t know how it can be done.”
Several former Test cricketers and even the head of the Pakistan Cricket Board Najam Sethi questioned match referee David Boon’s soft punishment of du Plessis.
Waqar also agreed that du Plessis got away with his rubbing of the ball on the zip of his trousers’ pants.
“I think he got away with it, considering the severity of the offence,” he said. “Had it been a sub-continent player he would have been punished harshly, so there should be uniformity in punishment.”
Waqar said the International Cricket Council will come under more pressure if ball tampering is legalised as the gentleman’s game has recently been tainted with match-fixing and spot-fixing scandals in international matches.
“I think that [legalising tampering] will cause more problems because already there is lack of sportsmanship in the game and the ICC will be under one more problem,” he said.
Waqar believed that batsmen already suffer a lot when they come up against good bowling attack on hard and bouncy wickets in countries like Australia and South Africa and they will face more hardships if ball tampering is made legal.
“I’m sure batsmen will start shouting in two months if you legalise ball tampering because the ball will do a lot,” he said.
Waqar said use of different types of balls in international matches is another hurdle in making ball tampering legal.
“There are 10 teams who play international matches they use three to four types of different balls which will behave differently if tampered,” he said. “The pitches also differ, so it cannot be uniform.”

Sync Sports
Author syncmagPosted on March 14, 2013April 11, 2013
CENTURION: South Africa completed a series clean sweep when they beat Pakistan by an innings and 18 runs on the third day of the...
Read More

Author adminPosted on May 6, 2013May 6, 2013
Pakistan’s Twenty20 captain Mohammad Hafeez on Tuesday showered praise on Test and One-day captain Misbah-ul-Haq for his fine leadership qualities and said his commitment...
Read More