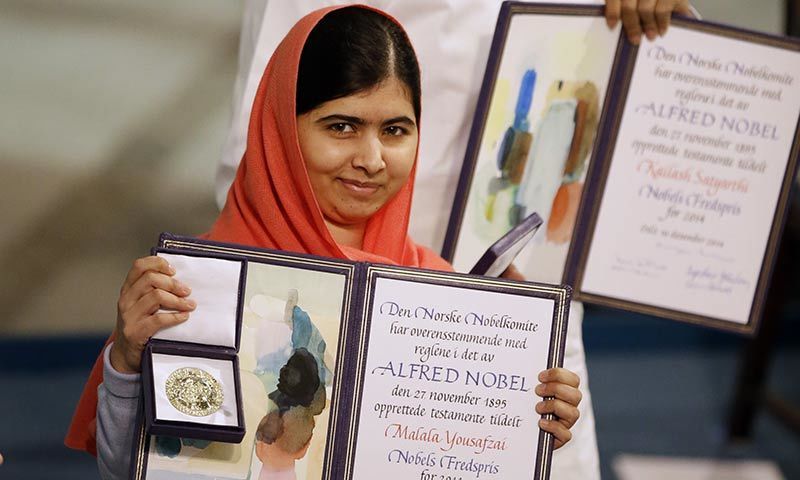 OSLO: Malala Yousafzai of Pakistan and Kailash Satyarthi of India have received the Nobel Peace Prize for risking their lives to fight for children’s rights. The 17-year-old Malala, the youngest ever Nobel winner, and Satyarthi, age 60, collected the award at a ceremony in the Norwegian capital to a standing ovation.

During her speech at the awards ceremony Malala said that, “I am grateful for the letters and cards that I still receive from all around the world. Reading your kind and encouraging words strengthens and inspires me.”

“I am very proud to be the first Pashtun, the first Pakistani, and the first young person to receive this award,” she said.

“I am also glad that we (Satyarthi) can stand together and show the world that an Indian and a Pakistani can be united in peace and together work for children’s rights,” Malala said.

Earlier, chairman of the Norwegian Nobel Committee Thorbjørn Jagland during his opening speech said that world conscience “can find no better expression than through Kailash Satyarthi and Malala Yousafzai.”

“A young girl and a somewhat older man, one from Pakistan and one from India, one Muslim, the other Hindu; both symbols of what the world needs: more unity. Fraternity between the nations!” said Jagland.

He said that, “Satyarthi and Yousafzai are precisely the people whom Alfred Nobel in his will calls ‘champions of peace’.”

“Malala Yousafzai is far and away the youngest Peace Prize Laureate of all time,” Jagland said.

“Malala Yousafzai’s vision was clear right from the start. Girls had a self-evident right to education…Her courage is almost indescribable,” he said.

I also congratulate the young Malala Yousafzai for the momentous achievement.

Malala has already received a host of awards, standing ovations and plaudits from the United Nations to Buckingham Palace.

But on the eve of the ceremony she said she was far from ready to rest on her laurels.

“We are not here just to accept our award, get this medal and go back home. We are here to tell children especially that you need to stand up, you need to speak up for your rights … It is you who can change the world,” Malala told a press conference at the Nobel Institute in Oslo.

Pen and a book

“In this world if we are thinking we are modern and have achieved so much development, then why is it that there are so many countries where children are not asking for any iPad or computer or anything. What they are asking for is just a book, just a pen, so why can’t we do that? “

Malala was 15 when a Taliban gunman shot her in the head as she travelled on a school bus in response to her campaign for girls’ education.

Although her injuries almost killed her, she recovered after being flown for extensive surgery in Birmingham, central England.

She has been based in England with her family ever since, continuing both her education and activism.

For the first time ever the blood-soaked school uniform she wore when she was shot near her home in the Swat Valley in October 2012 will go on display in an exhibition at the Nobel Peace Center in Oslo this week.

At her invitation, five other teenage activists joined her in Oslo from Pakistan, Syria and Nigeria, including Shazia Ramzan, 16, and Kainat Riaz, 17, who were also shot during the Taliban attack on Malala, and 17-year-old Amina Yusuf, a girls’ education activist from northern Nigeria where the terror group Boko Haram abducted more than 200 schoolgirls during a raid in April 2014.

Asked why she thinks some Islamic extremist groups are opposed to education for girls, Malala, dressed in a multi-coloured headscarf, replied:

“Unfortunately, those people who stand against education, they sometimes themselves are uneducated or they’ve been indoctrinated.”

The pairing of Malala and Satyarthi had the extra symbolism of linking neighbouring countries that have been in conflict for decades. After being named as a laureate, Malala said she wanted both states’ prime ministers to attend the prize-giving ceremony in Oslo.

“If the prime ministers had come here I would have been very happy. I would have thought of it as a big opportunity to ask them… to make education their top priority and work on it together because we see the number of children who are out of school and suffering from child labour are mostly in India and Pakistan.”

While Malala will be the star of the annual Nobels extravaganza — also featuring the literature prize winner, Frenchman Patrick Modiano, and his compatriot Jean Tirole with the economics award — her peace prize co-winner Satyarthi is far less well-known.

He welcomed the increased attention the Nobel brought to the cause of children in bonded labour.

“There are children who are bought and sold like animals,” the jovial 60-year-old, clad in traditional Indian dress, told reporters at the Nobel Institute.

Satyarthi’s organisation Bachpan Bachao Andolan (Movement to Save Childhood) prides itself on liberating more than 80,000 children from bonded labour in factories and workshops across India and has networks of activists in more than 100 countries.

According to the International Labour Organisation (ILO) there are about 168 million child labourers globally. Nobel winners receive eight million Swedish kronor ($1.1 million, 862,000 euros), which is shared in the case of joint wins.

Let's Celebrate fast becoming the Party Anthem of the Season!

Author adminPosted on January 2, 2014May 23, 2014
Dubai: Dubai shattered the world record for the largest ever pyrotechnic display on New Year’s Eve with a show involving more than half a...
Read More

Author syncmagPosted on February 4, 2013February 4, 2013
How cold is it? Cold enough that parking pay stations malfunctioned in certain spots downtown. A couple of hundred of them it turns out.Stationnement...
Read More
In-Sync
Author adminPosted on December 11, 2014December 11, 2014
With a capacity of hosting over 500 students and equipped with state of the art facilities, FESF proudly inaugurated its Rashidabad Deaf Reach School...
Read More