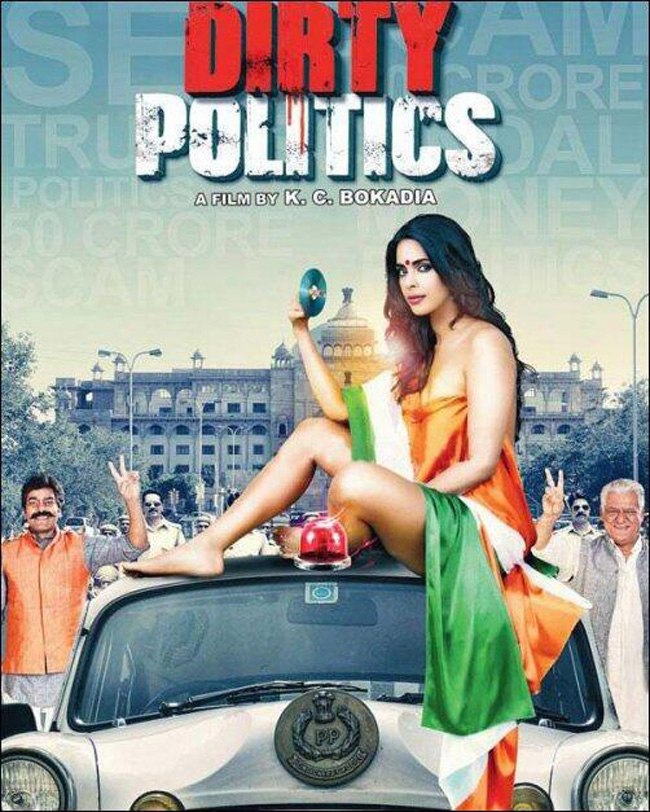 Mallika Sherawat’s raunchy dresses have always been the talk of the town. But this time around, the lady is in trouble for dishonoring the national flag.

The Central Board of Film Certification, the Union home ministry and Mallika Sherawat, all have been issued notices for having dishonored the national flag.

“The film poster shows Mallika sitting atop a car fitted with a beacon and wrapped in tricolour below her waist. Offended by it, I filed the petition seeking action against the actress,” Rao said.

In response to the PIL filed by Rao, a bench comprising Chief Justice Kalyan Jyoti Sengupta and Justice PV Sanjay Kumar of the Hyderabad High Court issued notices to the Central Board of Film Certification, the Union home ministry and Mallika Sherawat.

In his PIL, Roa alleged that the actress and film producer Kastoor Chand Bokadia had intentionally humiliated the national flag in the poster of the film, Dirty Politics.

He has further sought that the court should restrict the producer from further displaying and using the poster as part of the film’s promotion.

The Court has directed the respondents to put forward their stance through counter affidavits. The case has been adjourned for six weeks.

Author adminPosted on January 4, 2016
The much anticipated film of 2016, Shivaay has left the audience surprised and overwhelmed with its first look! Well, we hear that Ajay Devgn...
Read More
Sync Tainment
Author syncmagPosted on March 15, 2013April 11, 2013
Aamir Khan is all set to lock lips with the Peekay babe Anushka Sharma. If buzz is to be believed, Peekay will see Aamir...
Read More

Author syncmagPosted on May 6, 2013May 7, 2013
Romance is an everlasting element of Bollywood love stories, but love has no boundaries. Our B’town celebs, who romanced each other on reel turned...
Read More