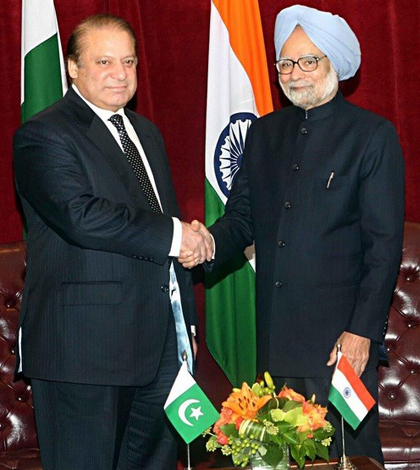 The meeting between the prime ministers of India and Pakistan that was held on the sidelines of the UN General Assembly in New York would help the two nuclear-armed neighbours improve their bilateral ties, said a US official.
“Dialogue is a positive step forward and we’ll continue to encourage that,” State Department spokesperson Jen Psaki told reporters during the daily press conference when asked about the meeting between the two prime ministers.
Manmohan Singh met his Pakistani counterpart, Nawaz Sharif, on Sunday in a closely-watched meeting that went along for about an hour, during which he raised the issue of terrorism emanating from Pakistani soil and urged Islamabad to put in more efforts to curb cross-border terrorism.
Tensions were high between the two countries after a series of border incursions which left six Indian soldiers and three Pakistan soldiers killed.
“Well, we welcome any and all high-level discussions between Pakistan and India. That would improve their bilateral relationship. As President Obama said last week, we share an interest with both countries in seeing a peaceful reduction of tensions on the subcontinent, and we continue to support, strongly, efforts by India and Pakistan to improve all aspects of their bilateral relations, and we encourage further dialogue,” said Psaki.
The Barack Obama administration has been encouraging the two countries to resume the peace process along their border. However, Psaki refrained from making any public evaluation of the results of the talks between the two heads of states.
During the UN General Assembly address Sharif insisted again upon a UN Security Council resolution regarding the disputed border of Kashmir, to which the State Department official said there has been no change in its stance on this issue.
“Our position on Kashmir has not changed. We still believe the pace, scope, and character of India and Pakistan’s dialogue on Kashmir is for those two countries to determine, and we continue to encourage dialogue,” Psaki added.

In-Sync
Author syncmagPosted on March 18, 2013April 11, 2013
Most Canadians are in favor of restrictions on the number of qualified immigrants accepted into the country each year, a new poll suggests. A...
Read More
In-Sync
Author adminPosted on April 17, 2013
BADIN: Former speaker Fehmida Mirza has said she was neither a defaulter nor obtained any loan from a bank. She said she was on...
Read More

Another Love, Another Taj:Indian Builds A Taj Mahal For His Wife

Author adminPosted on August 21, 2013
A retired government official in a northern Indian village is building a scaled-down replica of the historic Taj Mahal in memory of his wife...
Read More

Author adminPosted on January 16, 2015
ABOARD THE PAPAL PLANE: Pope Francis said on Thursday there are limits to freedom of expression, especially when it insults or ridicules someone’s faith....
Read More
In-Sync
Author syncmagPosted on March 19, 2013April 11, 2013
MONTREAL—It’s a case that drew international headlines and launched the biggest manhunt in Montreal police history. On Monday, a preliminary hearing is set to...
Read More