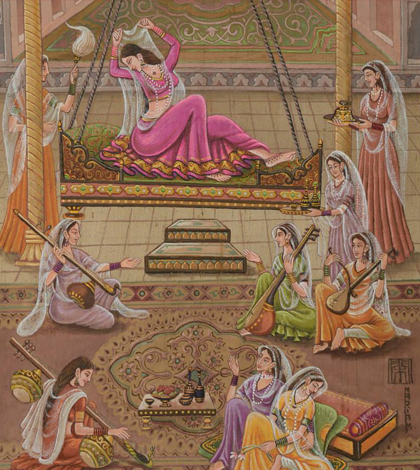 Viewing the art of the senior artist Mariam Saeedullah Khan, one may discover nuances of her wide art experience of Italy, Germany, China and Japan as well as her initial introduction to her discipline in Lahore. In her studio one discovers paintings of varied sizes and mixed media. Her subjects vary from the art of the Moghul emperors on a larger scale, the exquisite linearity of Japanese art and her love of nature. There is also the passion she has returned to through the years, the freedom of wild horses galloping across the plains.
As a young bride living with her in-laws in Lahore, Mariam began her serious study of art attending the classes of Sheikh Ahmed. He was a strict teacher, but this suited Mariam’s temperament and she enjoyed the quiet discipline he imposed on his students.
She continued to attend the classes until her husband joined the Pakistan Foreign Service and they were posted to Italy. There she found herself living close to a famous art institute, the Berraria Academy in Milan. By then she had a family and devoted much of her time to her small children, but she joined an evening course of art and art history, and studied for four years, earning a Fine Arts Diploma, before being posted to Bonn in Germany.
Close to her new home near the river Rhine, Mariam discovered the Rosenthal workshop site on the river. She began to visit the studio where pottery and ceramics were painted, and was inspired to paint several designs which she showed to the director. Her work was appreciated and several of her designs were accepted. Particularly popular were the romantic eastern princess designs that suited the Rosenthal themes.
The artist’s major period of study began in Japan, where the family was to remain for seven years. With the children increasingly independent and going to school, Mariam studied Japanese Fine Art, at the University of Ueno, Tokyo. In the beginning her work was very much by example as she had no knowledge of the language. Fortunately the teachers spoke some English, and aware of her sincerity were very considerate. As time passed, Mariam began to learn the language of art. She described the course as extremely disciplined, and for two years she was not allowed to touch colour. The students in her year focused on drawing and brush strokes. Mariam recalls that on one brush, she learned to take three colours at the same time, and then to brush them one at one time, resulting in a beautiful effect.
When her youngest daughter was born in Japan, Mariam determined to continue her studies so she carried the baby to classes tied on her back. There the baby became a great pet of the class where everyone loved her. Mariam attended the classes for over three years mastering the rich tones that are achieved with colour, chemical and dye. The discipline remained an important element of her art in years to come. Mariam successfully graduated and was given a seal to sign her work with the name `Tranquility’.
This seal one finds on her work today.
Later on in London and in Japan, Mariam qualified as an interior decorator, a profession she practiced on returning to Pakistan. Among the interesting projects she enjoyed was the Pakistan embassy complex in China. There she designed the community centre and offices as well as the residency. It gave her an opportunity to study Chinese art and traditions.
In Pakistan Mariam became the Karachi Consultant for Sheraton, and most of the big hotels commissioned her paintings. At that time she was mostly working on large panels. The art of the moghuls had been a passion with the artist since childhood, and when completing her study in Japan, she inducted some of the Japanese techniques into Mughal paintings.
Mariam was the first foreign artist to have received an award from the Metropolitan Museum of Art, Tokyo. Her work has been exhibited in Christies, acquired for the permanent collection of the Rockefeller Foundation and presented to America’s President Ford. The Pakistan Government chose Mariam’s work to present to the late Shah of Iran. Her work has been exhibited in prestigious galleries and museums internationally.
Now showing her work at the Momart Gallery, Karachi, after a gap of several years, one finds the singular beauty of the work continues to fascinate the viewer. There is a timeless quality to the artist’s work which explains the Japanese title given her: Tranquility.