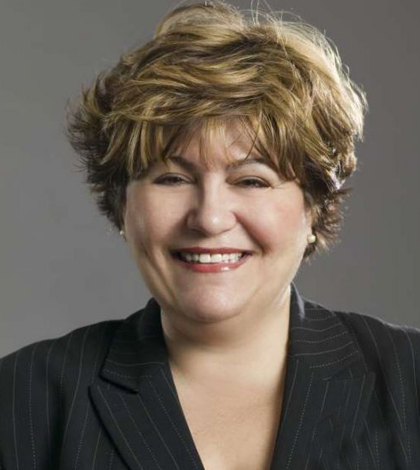 Mrs. Mary Deros, first elected in 1998 as City Councilor for the district of Park Extension in the City of Montreal, was the first woman of Greek origin to be nominated to the city’s Executive Committee and was given the responsibility for sports, recreation and social development for the city from 1998 until 2001. During this mandate, she was a member of the Board of Directors of the Montreal Urban Community, member of the Executive Committee of the Regional Council on Development of the island of Montreal, and member of the Board of Directors of the Regional Health Board and Social Services. She was also responsible and was special advisor to the Mayor on the Mayor’s committee for a program called “Les Quartier cibles” – a program that identified 11 disadvantaged districts for revitalization. She also was a board member of the Montreal Metropolitan Council. Probably more than any other municipal politician, Mary Deros has been the face of City Hall for members of the myriad ethnic groups across Montreal.

I am, and always have been passionate about working with people. My strength is working with cultural communities and being their voice on issues that concern them.

Syncmag had the opportunity to interview her, let’s have a chit chat with the great lady!

Syncmag: As a well-known and very active politician in Montreal, please let us know what led you to be passionate about politics?
M.Deros: I have always been in positions of Customer Service oriented jobs. I was recruited by Mayor Pierre Bourque in 1998 due to the fact that I had been a volunteer on the board of directors of the Park Extension Soccer Association Panellinios as secretary treasurer, and President of the board of directors of PEYO for 15 years. Once elected, I realized that the role of a city councilor is to provide services to citizens. I am, and always have been passionate about working with people. My strength is working with cultural communities and being their voice on issues that concern them.

Syncmag: You had been the first women of Greek origin to be nominated to the city’s Executive Committee. Were there any challenges you had to face, how did you get them manage?
M.Deros: Yes, and I am very proud of that! The challenges were finding enough time in the day, in the week, to meet the demands of my job and my family obligations.

Syncmag: You have been the member of City Council for remarkable time, what major responsibilities you undertook during the course of time?
M.Deros: In the first mandate from 1998 – 2001, I was responsible for Sports, Recreation and Social Development as well as the Mayor’s committees for Youth, Seniors, Women’s issues and Handicapped citizens as well as improving 11 neighborhoods. This was the time that I was able to bring in water games at the Parcs in Park Extension, develop our Library, create a level walkway from Ball Avenue over to Jarry Park as well as bringing in the social housing ( 60 large family apartments) on Durocher from D”Anvers to Liege. I was in the opposition from 2001 – 2008, but we still were able to invest in the soccer and cricket fields at Jarry Park, and construct our indoor swimming pool in Park Extension.

Syncmag: For upcoming Montreal Municipal Elections, you have once again nominated for the position of City Council in Parc-Extension, what will your goals be if you’re elected?
M.Deros: Few of the goals will be:
 To continue to serve and support all cultural communities.
 Develop social affordable housing.
 Traffic calming to make our neighborhood safe for our families.
 Create new green spaces.
 The redevelopment of Jarry Street.
 Work in bring employment opportunities for our citizens.

Syncmag: What is the mandate of your party for the upcoming elections?
M.Deros: In our team, there are women and men of diverse backgrounds, with a rich professional and personal heritage. We are all driven by the same ambition to put Montreal back on track. We all have the same values of integrity, efficiency and creativity necessary to restore this unique, open, modern and welcoming metropolis that is Montreal.
Together we must ensure that our citizens come first. Our priorities for Montreal is to make Montreal a Smart City…to encourage new investments and the return to prosperity…..to bring families back to Montreal and to take care of our seniors….to eliminate corruption….to develop an efficient road network.

Syncmag: What do you consider to be the number one issue affecting our community? How it can be effectively addressed?
M.Deros: Participating in the democratic process. For starters the community needs to be more involved so that they may be informed of programs available for business, for home owners, for youth, sports activities, and job opportunities. We need to develop a better communication system between the authorities and the community to be able to inform and update the community so that you may take full advantage of the programs that are available.

Syncmag: What is the most notable contribution to social change in politics that you have made?
M.Deros: My accessibility to the cultural communities has helped many in having a voice at city hall, working together to find solutions and informing communities of their fundamental rights to have access to services and adequate housing.

Syncmag: You have been the face of City Hall for members of the myriad ethnic groups across Montreal. How did you see the cultural differences and its impact on any society striving to flourish?
M.Deros: Over the last 15 years in municipal politics I have had the opportunity to meet with our rich diversity. The only difference that I have observed is the cultural side – they way we dress, the way we pray, the spices we use in our food, our music and dance. But basically all cultural communities have the following common aspirations:
 Having a comfortable and safe home to bring up the family.
 Having a job to be able to cover the necessities of life.
 To be able to send children to good schools so that they can have a good education.
 To have a place a worship to practice their religion.
 To having safe parks where they can take their children for sports and leisure activities.

I have worked hard in all aspects to work with our diverse communities to assure that the basic and fundamental needs are met.

Syncmag: Do you think Canada is doing a good job with its multicultural policy? What more/ changes would you like to see at a systemic level?
M.Deros: I believe this would be a question for a federal representative and to the organizations that receive direct help for such issues.

Syncmag: I would like to know something about your personal self, what kind of lady you are, what is that best describes you?
M.Deros: I celebrated my 41 wedding anniversary with my husband on the 21 of October. I am a wife, a mother to three young adults. I care about people and try to help whenever possible. I am also a multi tasker – this means I often work on several things at the same time. These are my strong points – I usually do not talk about myself – best thing would be to ask people to describe me.

Syncmag: Would you please like to give any message to our reader!
M.Deros: I would like to thank all the friends and supporters that have helped in this campaign for re-election. Please support all the candidates in Montreal under the EQUIPE DENIS CODERRE POR MONTREAL for the best team for Montreal. Your continued support and belief in me is very much appreciated! Insha Allah with your support once again I will be victorious and continue to serve you for another 4 years!

Author adminPosted on June 25, 2016
Sunidhi Chauhan, one of India’s top 10 singer, has been entertaining audiences for over 15 years. Chauhan is praised by the best, including Lata...
Read More
Sync Rendezvous
Author syncmagPosted on March 15, 2013May 17, 2013
This year SynesthAsia continued the legacy dedicated to Fashion, Entertainment and philanthropy -along with a uniquely Asian theme–by interpreting an intersection of Eastern and...
Read More

Up Close & Personal with Sameer Zuberi

Author adminPosted on October 23, 2013
Canadian in appearance, Indian in origin, Universal in appeal, Prita Chabbra is a multi-talented artist. For her music is her passion and social work...
Read More
Sync Rendezvous
Author syncmagPosted on March 28, 2013October 23, 2013
“If I have to make a film about my life so far, then it will be a full-of-masala (spice) flick”. Bio: Adnan Sami Khan...
Read More