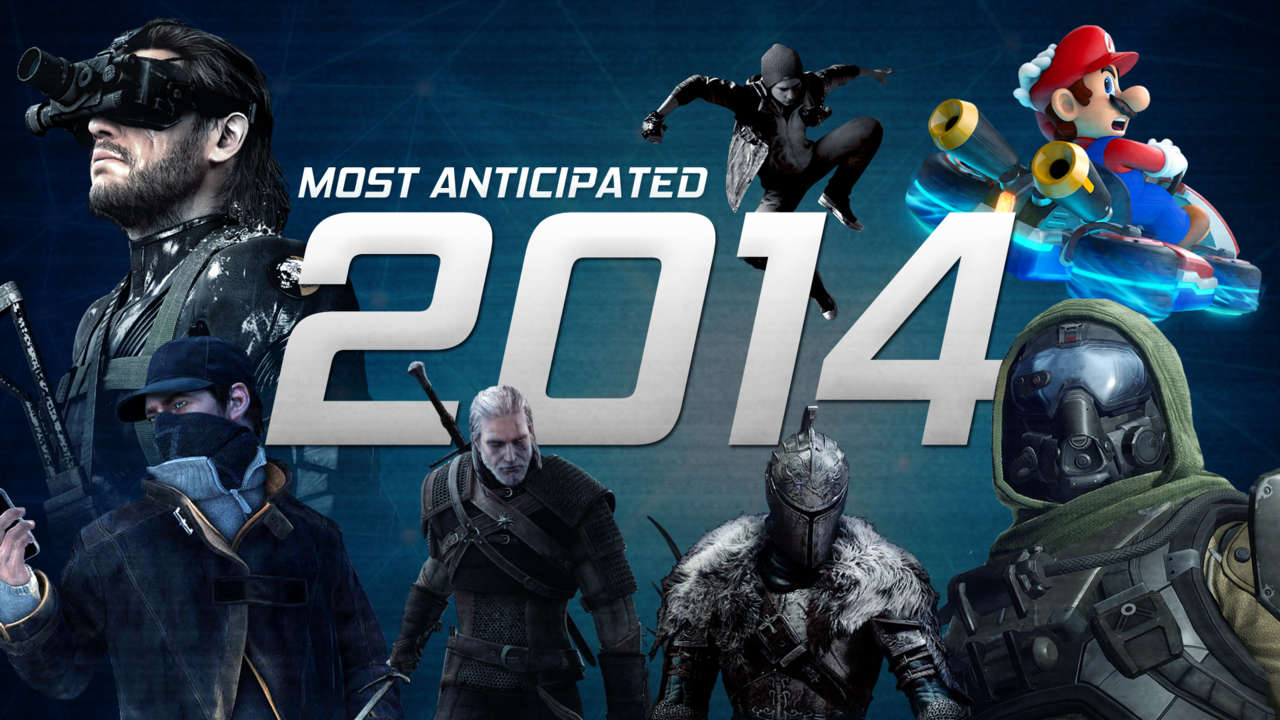 2013 brought with it a wealth of fantastic new games like the PlayStation 4 and the Xbox One, along with Grand Theft Auto V – the most successful game launch of all time and we’re definitely feeling a little spoiled, but the year is over and gamers are already hungry for more. Luckily the release schedule for 2014 already boasts some exciting and enticing titles – both new installments in well-loved franchises and brand new IPs for the new console generation.

Some of these are sequels that we’ve waited years for, others stood out thanks to eye-popping trailers and others are just too ambitious to ignore. Find out which games you should be keeping an eye out for next year in our list of the few Most Anticipated Games of 2014.

Watch Dogs
Taking the prize for the most topical premise of 2014, Watch Dogs is an open world hack-’em-up set in an alternative version of Chicago, where everything that uses electricity is hooked up to a central operating system, simply called the CtOS. An unfortunate side effect of this is that anyone who can hack into the CtOS can effectively play god – and they don’t have to play nice.

Vigilante Aiden Pearce carries a gun, but the most powerful weapon at his disposal is his smartphone. Taking on the role of Aiden, the player can manipulate the world around them – from traffic lights to security systems – and use this talent to help others or achieve personal wealth and power. The lesson to take away from this is that iPhones are eventually going to take over the world.

Thief
Fans of the original Thief games have been watching the development of Eidos-Montréal’s reboot with understandable trepidation, and the studio itself has seemed torn between trying to please the loyal fanbase whilst also trying evolve the game by drawing on elements from more recent stealth games like Dishonored.

The promise of seeing Garrett the master thief back in action is enough to keep our interest in Thief high, but this game isn’t a sure bet and there are a lot of mixed feelings towards it already. We’re keeping our fingers crossed, though – what’s life without a little larceny?

Halo 5
Following the initial reveal of the Xbox One at an event in May, Microsoft finally got around to showcasing games for its new console at its press conference during E3 2013. No one was entirely sure what to expect from the event, but a newHalo game, especially after the recent launch of Halo 4, was not something that many gamers planned for.

The official reveal trailer utilized some misdirection to keep watchers guessing the identity of the title – effectively concealing Master Chief in a robe for a majority of the footage – but the second the fragmented clothing blew off, fans became excited. While Microsoft has refused to call the new game Halo 5, the ‘2014’ that appeared at the end of the cinematic teaser was more than enough to have us excited for a next-gen Halo later this year.

inFAMOUS: Second Son
One of the major deciding factors when it comes to choosing between the latest consoles is their exclusives, andinFAMOUS: Second Son is a definite ace up the PS4’s sleeve. After excelling in the field of sandbox superhero games with Cole McGrath’s two-part story, Sucker Punch is back and looking very much on form.

The game introduces a new hero/villain (delete as appropriate), Delsin Rowe, a Peter Petrelli-esque superhuman with the ability to absorb powers from other superhumans. He’s also voiced by voice actor du jour Troy Baker. The first two inFAMOUS games were fun and engaging with a unique comic book style, and we’re eager to see what the next entry in the series has to offer.

Titanfall
Probably the best trailer for Respawn Entertainment’s Titanfallwas last summer’s action movie blockbuster Pacific Rim, which reminded everyone that climbing inside a giant mech and engaging in hugely destructive battles will never not be cool.

The titans of Titanfall come in a number of different classes and are only the main feature of a game that also includes parkour and jet packs. The player is placed in the shoes of a “pilot” who can run around in their squishy human form or turn the enemy’s resources against them by hijacking a titan and adding a whole lot of reach and power to their punches.

The Order: 1886
Concrete details about The Order: 1886 are still as foggy as the 19th century streets of Whitechapel, but what we can see peering out of the gloom is very intriguing. This PS4 exclusive takes the legends of King Arthur and his knights and adds an extra dose of fantasy and sci-fi, giving the noble Order a set of superhuman abilities and pitching them against a horde of chimeric creatures.

According to creative director Ru Weerasuriya, The Order: 1886 is designed to look as cinematic as possible and as such will play a significant role in the ongoing debate regarding whether or not games should be striving to look more like films. If you’re not interested in that particular discussion, however, it also lets you run around Victorian London shooting slobbery monsters with a laser rifle, so there’s something for everyone.

Destiny
There isn’t exactly a shortage of sci-fi shooters on the market, but Halo developers Bungie originally caught our eye with a swathe of gorgeous concept art for Destiny, a massive new project for the studio that’s had a lot of energy poured into piecing it together.

Pick a class, choose your weapons and find some friends for this multiplayer-oriented futuristic universe full of shooty adventures. Destiny is entering a highly competitive field but Bungie believes that this ambitious new IP has what it takes to shine in the new generation, and the enthusiasm is kind of contagious.

The Witcher 3: Wild Hunt
More monster hunting with Geralt of Rivia? Tak proszę, CD Projekt RED. Boasting an open world 30 times larger than that of The Witcher 2: Assassin of Kings, built on the brand new REDengine 3, The Wild Hunt promises more of the beautiful and deep open world that fans of the series have come to expect.

The third chapter of The Witcher also brings the series full circle, with Geralt once again called upon to confront the terrifying King of the Wild Hunt. The Witcher games are pretty plot heavy so we recommend playing through the first two again for a refresher – or playing them for the first time if you haven’t already.

Game of Thrones
It’s hard to think of many shows more perfectly suited to Telltale Games’ unique brand of tough decision-making gameplay and relationship-based storytelling than HBO’s Game of Thrones, and apparently both HBO and Telltale agreed.

Said to be based specifically on the show rather than the books, Game of Thrones will be the first in a series of collaborations between HBO and Telltale, and the prospect of being dropped into the political turmoil of the Seven Kingdoms is both terrifying and exciting. When you play the game of thrones, you win or you cry. Probably both.

Super Smash Bros.
It’s a roster of heroes the likes of which have never before been united in one game: Mario, Luigi, Link, Zelda, Mega Man, the Animal Crossing Villager, the Wii Fit trainer and many more. You’d better get ready to brawl, because the characters of Super Smash Bros are looking to get into the fray.

Nintendo’s dual-release fighting game definitely looks like a must-buy for Wii U and 3DS owners. For starters, it’s the only game release of 2014 where you’ll see a bright yellow electric mouse going toe-to-toe with a pink puff ball. Barring any surprise announcements at E3, of course.

The Division
Sharing more than a few thematic similarities with Watch Dogs, Ubisoft’s ambitious multiplayer-focused open world RPG envisions a future version of New York that has been brought low by the chinks in the armor of global supply chains. The player has been enlisted into the eponymous self-sustained special operations group called simply The Division, and must work together with friends to prevent the city from collapsing into all-out chaos.

Purely in terms of visuals, The Division is everything that we could hope for from the new console generation, and a video demonstrating the kind of graphics on offer from the brand new Snowdrop engine left a lot of jaws on the floor. There’s extensive character customization for players who enjoy the RPG aspect and some truly organic multiplayer and co-op gameplay mechanics for those who love to interact with others.

EVE: Valkyrie
At E3 2013, the Oculus Rift virtual reality headset stole the thunder away from the next-gen PlayStation 4 and Xbox One hardware and software showcases thanks to CCP Games’ space sim prototype, EVE-VR. That concept has since become its own game titled EVE: Valkyrie, and alongside the big budget Star Citizen, Valkyrie is helping user in the return of space sims.

EVE: Valkyrie, from our early demo tests, successfully implements gameplay and VR tech to give players the truest feeling yet of actually flying a starfighter through space and against other players and we can’t wait to try out the finished product in 2014.

Google Doodle Points To Olympic Charter In Defending All Athletes

Author syncmagPosted on May 7, 2013May 9, 2013
If you want to teach your child anything, the best way is to do it through a fun activity. This also includes teaching the...
Read More
Sync Young
Author syncmagPosted on March 14, 2013April 11, 2013
Discover how to handle this type of request from your young children and learn about social media alternatives for teens. Most of us have...
Read More

The Main Lesson to Take Away from Parent Coaching

Author syncmagPosted on May 13, 2013May 17, 2013
The main thing that you need to think about when it comes to parent coaching is that you are the one who decides what’s...
Read More

Ways to Get Kids to Listen to You

Author adminPosted on October 24, 2013
Almost all parents would agree that trying to talk to your children is no easy task, especially when sometimes they don’t seem to be...
Read More

Tips for Purchasing A School Bag

Author adminPosted on September 12, 2013
Getting children ready for school often involves multiple treks to the mall for clothes and supplies. While it’s fine to penny-pinch on many things...
Read More

Childhood Friendships May Be Key To Adult Happiness