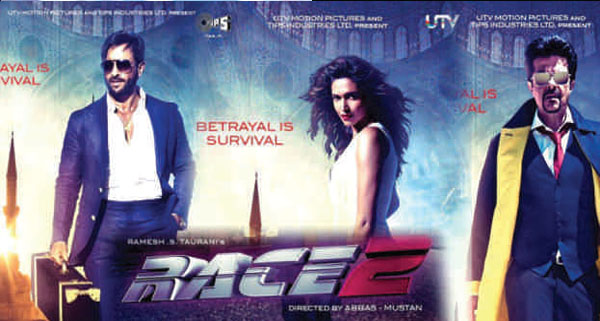 “Race 2” is a Bollywood action thriller film directed by Abbas-Mustan and produced under the Tips Music Films banner and is the first major release of the year. It is the sequel to the 2008 hit film, Race, and stars an ensemble cast that includes Anil Kapoor and Saif Ali Khan reprising their roles as Robert D’Costa and Ranveer Singh from the previous film while Deepika Padukone, John Abraham, Jacqueline Fernandez and Ameesha Patel are new additions to the cast. Bipasha Basu will reprise her role of Sonia in a special appearance.[3] Race 2 released on 25 January 2013.
Cast:
Saif Ali Khan as Ranvir Singh
Deepika Padukone as Elena
John Abraham as Armaan Malik
Anil Kapoor as Robert D’Costa (RD)
Bipasha Basu as Sonia (Cameo Appearance)

Author adminPosted on February 11, 2015
JUST IN: Jon Stewart, the host of Comedy Central’s The Daily Show, will step down later this year. The comedian said it had “been...
Read More

Jennifer Lawrence Beats Kim Kardashian As Most Googled Celebrity of 2014

Author adminPosted on December 18, 2014
Jennifer Lawrence, the “Hunger Games” actress beat Kim Kardashian, the woman who tried to “Break the Internet”, to top the list of the most...
Read More