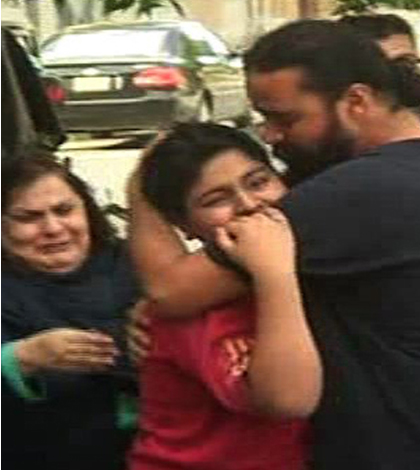 KARACHI: A big drama of social media friendship or kidnapping for ransom came to an end Monday morning, when the Anti-Violent Crime Cell (AVCC) and Citizen-Police Liaison Committee (CPLC) carried out an operation near Hub, rescuing Defence Area 13-year-old boy, Mustafa trapped on a friendly note.

CPLC Chief Ahmad Chinoy said that Mustafa, 13 son of a senior officer of Customs Department, was kidnapped from outside a school in Defence Phase IV here on Friday.

AVCC SSP Niaz Khoso said that the kidnappers had demanded a ransom of Rs50 million for the release of Mustafa.

Later, AVCC and CPLC carrying out a targeted joint operation in the wee hours on Monday rescued Mustafa safely, while the four kidnappers were killed and one was injured besides two policemen were also injured during an encounter in this process.
CPLC Ahmad Chinoy said that according to the initial report the kidnappers belong to the Lyari gang war.

Mustafa told that the kidnappers had also tortured him. The mother of Mustafa said that making friendship with unknown persons on Internet should learn a lesson to avoid such unfortunate incident.

Shahbaz Scrambles To Bring 2,000MW On Line In Nine Months

Author syncmagPosted on February 4, 2013February 4, 2013
The latest buzz is that Rockstar babe Nargis Fakhri and Dhoom boy Uday Chopra are to set to get married this year. The rumour...
Read More
In-Sync
Author syncmagPosted on March 14, 2013April 11, 2013
Let pasta be pasta — and not pâtes alimentaires, Quebec’s language watchdog has let it be known,after controversy boiled over when it tried to...
Read More

Author adminPosted on August 5, 2016
WASHINGTON: On the subject of women in politics, Hillary Clinton is fond of quoting the words of another illustrious first lady, Eleanor Roosevelt, who...
Read More

Author adminPosted on February 13, 2013
Gujarat chief minister NarendraModi met Prime Minister Manmohan Singh on Wednesday and expressed his unhappiness over the Centre’s refusal to provide gas to the...
Read More

Will Rahul Gandhi walk the talk?

Author syncmagPosted on January 24, 2013January 24, 2013
It was a meticulously planned and well-executed operation. Though the clamour for a bigger role for Rahul Gandhi in the Congress had started several...
Read More