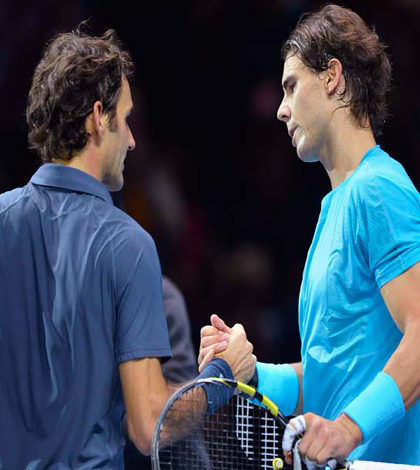 LONDON: Rafael Nadal won the latest instalment of his epic rivalry with Roger Federer as the Spaniard swept into the final of the ATP World Tour Finals with a 7-5, 6-3 victory on Sunday.
Nadal was in commanding form in the last four showdown at London’s O2 Arena and his 22nd win in 32 meetings with Federer booked the world number one’s place in Monday’s final against either Novak Djokovic or Stanislas Wawrinka.
But there was nothing routine about Nadal’s latest show of force against Federer as it marked the first time he had ever beaten the Swiss great indoors after four defeats, including a loss in the 2010 final of the Tour Finals.
That was the 27-year-old’s only previous appearance in the final of this prestigious season-ending event, but he looks in the mood to finally end his long wait to lift the trophy after halting Federer’s remarkable run of success in the tournament in just 79 minutes.
Federer, a six-time winner of the event, had reached the last three finals, winning twice before losing to Djokovic last year.
But this has been Nadal’s year and the 13-time Grand Slam winner, who has also won Olympic gold and the Davis Cup, is now just one more victory away from finishing a glorious campaign by adding the last major prize missing from his glittering CV.
“It’s the perfect way to finish the season, probably one of the best seasons of my career,” Nadal said.
“This is a special tournament but I have lost here before and not had the most luck, so it’s great to be in the final.”
Federer added: “I just struggled to stay consistent enough throughout the match and that’s why he deserved to win. He was better today.
“It’s unbelievable that he gets away with playing so far back indoors these days, but that’s the conditions. So credit to him for making that work for him.”
Nadal has now reached 14 finals since his return from seven months out with knee tendinitis, winning 10 titles including the French and US Opens.
But, while Nadal has thrived over the last 11 months, Federer has endured arguably the worst season of his career, dropping to seventh in the world, winning just one title and failing to reach a Grand Slam final for the first time since 2002.
After a tight opening to the first set, Federer had Nadal under pressure in the sixth game, but his failure to push home his advantage proved the decisive moment of the match.
Federer had a break point on three occasions and twice Nadal was able to hit his way out of trouble before the Swiss star missed with a wild and wayward forehand.
It was the kind of mistake, caused by a desperate desire to create a winner from nothing, that Nadal so often provokes in Federer.
Nadal quickly doubled the frustration for Federer, breaking for a 5-4 lead when yet another top-spin bullet from the baseline flashed past the Swiss star’s defences.
Both players were mixing some breathtaking play with occasional sloppy play and the result was a rollercoaster end to the set.
When Nadal tried to close out the set, Federer pushed the Spaniard out of his comfort zone and broke back.
But, not for the first time in his troubled season, Federer lost his composure at the crucial moment and Nadal broke again.
Given the chance to serve out the set for a second time, Nadal delivered in ruthless fashion, crashing a series of winners to take the game without dropping a point.
Federer couldn’t make any impact on Nadal’s serve in the second set and the match started to slip from his grasp when the Spaniard punished another sloppy game from the Swiss to break for a 3-2 lead.
That was all the incentive Nadal needed to race to the finish line and, with Federer’s unforced error total climbing to 32, it wasn’t long before the Spaniard was punching the air in celebration.

“I Won't Be Retiring, Not For A Long Time,” Clarke Says

Author syncmagPosted on March 28, 2013May 7, 2013
DUBAI: Indian fast bowler Ishant Sharma has been fined 15 per cent of his match fee for breaching the ICC Code of Conduct during...
Read More
Sync Sports
Author syncmagPosted on March 15, 2013April 11, 2013
Margaret Purdy of Strathroy, Ont., and Michael Marinaro of Sarnia, Ont., won the silver medal in pairs on Thursday at the world junior figure...
Read More