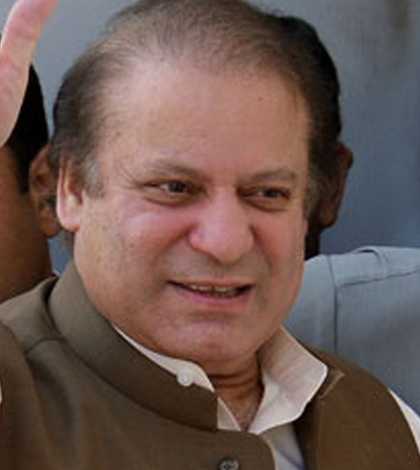 LAHORE: Nawaz Sharif on Monday said his government would establish friendly ties with India, adding that he would invite Indian Prime Minister Manmohan Singh for his oath-taking ceremony to Islamabad.

Speaking to foreign correspondents at his Raiwind residence, Sharif called upon Pakistan Tehrik-i-Insaaf to respect the mandate of the people and accept the results of the elections.
He further said that his government would devise a national policy to tackle the problem of terrorism. Referring to the attack on PML-N leader Sanaullah Zehri in Balochistan, Sharif said it was not fair to say that terrorism had not affected PML-N.
We will contact every party for the purpose of forming our policy on terrorism, Sharif said, adding that the PML-N government would respect the mandate given to parties by the people from the areas where they have won.
He moreover said that economic revival was the PML-N’s top priority.
On a question pertaining to US drone attacks in Pakistan’s northwestern tribal areas, Sharif said his government would try to convince America to stop those. He said his government will help US forces withdrawing from Afghanistan.
He further said that the PML-N government in its first 100 days would come out with policies on all major issues confronting Pakistan, such as terorirsm, the economy et cetera.
Sharif said Pakistan will become the Asian tiger in his government.

Author adminPosted on October 23, 2013
A group of notable Canadian women is launching a campaign for gender-neutral language in the English lyrics of O Canada. The group said the...
Read More

Author adminPosted on November 16, 2015
Turkey warned France almost a year ago over a suspected Islamic State (IS) militant who blew himself up in the bloody Paris attacks but...
Read More

Author adminPosted on October 23, 2013
NEW YORK CITY: The New York City Opera said Tuesday it would close and file for bankruptcy after 70 years, having failed to secure...
Read More

Author adminPosted on February 17, 2014May 23, 2014
Military equipment left in Afghanistan airfield after 2011 pullout Hundreds of shipping containers filled with expensive and important military equipment used in the Canadian...
Read More
In-Sync
Author syncmagPosted on March 19, 2013April 11, 2013
CHABAHAR, Iran: Rejecting threats from the United States and the expected diplomatic crisis in relations with Washington, Pakistan on Monday pushed ahead with a...
Read More