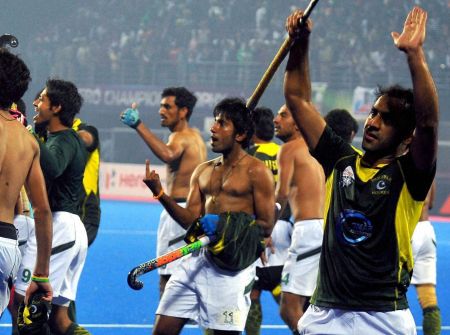 NEW DELHI: As Hockey India League (HIL) prepares for the 2016 season, the president of the country’s national federation, Narendra Batra, said the tournament would be off-limits for Pakistani players until the Greenshirts apologise for their misconduct in the 2014 Champions Trophy in Bhubaneswar.

“I would love to have Pakistan players but not with the kind of behavior they displayed in the Champions Trophy. And they have shown no regret of that incident in writing or otherwise. I don’t want to politicise the issue but that kind of behavior was unacceptable. Least we need an apology from them,” Hockey India chief Batra told Press Trust of India.

The International Hockey Federation (FIH) on December 14, 2014 put a ban on two Pakistani players for one match each, in the aftermath of Pakistan’s victory over India in the Champions Trophy semi-final.

After winning the game 4-3 in a pulsating encounter, several Pakistani players removed their shirts, danced in jubilation, and raised obscene gestures towards the crowd.

Pakistan coach Shahnaz Sheikh had apologised to the public and the country’s federation after the actions of his players caused an outrage in India and the team even came out with flowers for the public before the start of the final against Australia.

“Shahnaz Sheikh has apologised and assured me that such behaviour will not occur again,” said a press statement by Wiert Doyer, tournament director of the Champions Trophy.

“Matters seemed to have been resolved after Sheikh’s apology, even though the FIH had hinted of possible action against the Pakistani team.”

However, it seems the recent political tensions between Pakistan and India have spilled over and after cricket, hockey stands to suffer from the deadlock between the two countries.

Commenting on the impact of the league on Indian hockey, Batra said: “Our aim at HIL is to form a pool of players for the future. We already have eight players from HIL in the national side. HIL has created heroes and a space for itself in the big world of cricket.

“We have won the Asian Games gold after 16 years and were able to get the better of Pakistan in an Asian Games final after 48 years since 1966. So the national sport has certainly improved in the last four or five years and HIL is one of the reasons behind it.”

The Hockey India president also revealed plans of having qualified coaches for training and planning of the sport and players in the country.

“You will see many Indian coaches come up in the next three to four years. We are in the process of building a pool of professionals who can really take the game to a new level. Young officials have adapted to the changes in the game and that is encouraging and I can see Indian coaches making a mark in the next few years,” he said.

But Batra was of the opinion not to be shortsighted in the approach by segregating coaches in foreign and national categories.

“We have never had any egos as far as hiring foreign professionals are concerned. I don’t know whether I am right or wrong in my assessment, but I believe our neighbours Pakistan are lagging behind on this count and have failed to catch-up with the changing ways in the game,” Batra said.

Essay Organizing - A normal style investigated at EducationWorld could possibly be the trepidation a number of students feeling when basic that will put in composing a little something.

Sync Sports
Author syncmagPosted on March 14, 2013April 11, 2013
CENTURION: South Africa completed a series clean sweep when they beat Pakistan by an innings and 18 runs on the third day of the...
Read More