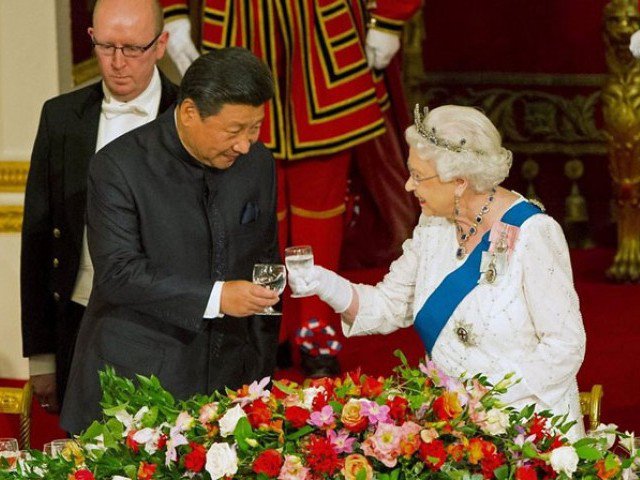 LONDON: Britain and China are set to seal business contracts worth billions on Wednesday, the second day of Chinese President Xi Jinping’s state visit, including on Britain’s first nuclear power plant in decades.

The leaders have hailed Xi’s visit as a milestone in relations between the two countries, as Prime Minister David Cameron rolls out the red carpet to court Chinese investment.

Xi is expected to make a statement on the planned Hinkley Point C nuclear plant in southwest England, where Chinese investors would take a one-third stake, according to the Financial Times.

France’s EDF is the lead contractor in the 24.5 billion pound nuclear project.

“Together with suppliers and our partners we have created a supply chain ready to build Hinkley Point C, which will help the UK meet its future need for reliable low carbon electricity,” EDF Energy chief executive Vincent de Rivaz said.

The project would create over 25,000 jobs and power six million homes, and is subject to approval by ministers, according to Britain’s Department of Energy and Climate Change.

The British government has said deals worth over 30bn pounds are to be signed during the four-day visit.

Other deals set to be announced on Wednesday are 325m pounds in “creative and technology partnerships,” according to Cameron’s office.

These include a 50m pound deal between carmaker Aston Martin and China Equity to develop a low-emission sports car, media deals to distribute BBC and Chinese entertainment, and for London’s Victoria and Albert Museum to open a design museum in the city of Shenzhen.

Britain also announced changes to Chinese tourist visas to increase the number of Chinese visitors, which Cameron said was “great news for our tourism industry”.

Xi enjoyed a glittering state banquet hosted by Queen Elizabeth II at Buckingham Palace on Tuesday, where the monarch called his visit “a defining moment in this very special year for our bilateral relationship”.

Xi rode to the palace in a gilded carriage past thousands of supporters with Chinese flags, while around 200 protesters denounced China’s human rights record.

Xi also addressed parliament in a rare honour for visiting dignitaries, promising to lift relations between Britain and China to “a new height”.

Cameron has been accused by some observers of kowtowing to China in a bid for investment and the visit comes at a particularly sensitive time as thousands of jobs are being cut in Britain’s steel sector, partly due to low Chinese steel prices.

Leading Hong Kong pro-democracy activist Joshua Wong, 19, who attended a protest against Xi near Buckingham Palace, told AFP that the prospect of Chinese cash “has blinded the eyes of David Cameron”.

“I just hope the British government and the British people can stand up for democracy because so many people in China are silenced and cannot stand up.”

But they were outnumbered by thousands of pro-Chinese demonstrators sporting hats, T-shirts and flags.

The visit includes a trip to Downing Street, Cameron’s country residence Chequers, and even Manchester City football club on Friday, in a city that is keen to attract more Chinese investments.

In a sign of increasingly close business ties, the People’s Bank of China on Tuesday launched a yuan-denominated bond in London for the first time as it seeks to internationalise its currency.

The sale worth 5bn yuan offered a yield of 3.15 per cent and was said to be the first time that a yuan-denominated bond auction has taken place outside of China and Hong Kong.

Britain’s courtship of China is being masterminded by finance minister George Osborne, Cameron’s closest ally and a favourite to succeed him as prime minister, who spent five days in China last month.

The visit comes amid increasing evidence that China’s economy, the world’s second-largest, is slowing down. Official figures Monday showed it grew 6.9pc in the third quarter of this year ─ its slowest pace since 2009.

The Chinese-British relationship has been rehabilitated since Cameron met the Dalai Lama in 2012, sparking an angry response from Beijing.

Author syncmagPosted on May 13, 2013May 13, 2013
Most of new funding will help care for terminally ill people at home he Parti Québécois government is injecting $15 million dollars to improve...
Read More

Author adminPosted on June 5, 2013
ROME: The Embassy of Pakistan in Rome, in collaboration with Zètema Progetto Cultura, an agency of Rome’s Municipality, organized a concert by famous Pakistani...
Read More

The Street Store arrives in Karachi

Author adminPosted on November 16, 2015
From the streets of Rio de Janeiro, Vancouver, Berlin, Manila, Tallahassee, and even Manchester, The Street Store finally arrived in Karachi on Sunday and...
Read More

Author adminPosted on September 12, 2013
MONTREAL — As Barack Obama made his case in Washington for an attack on Syria, two separate demonstrations brought the crisis in the Middle...
Read More