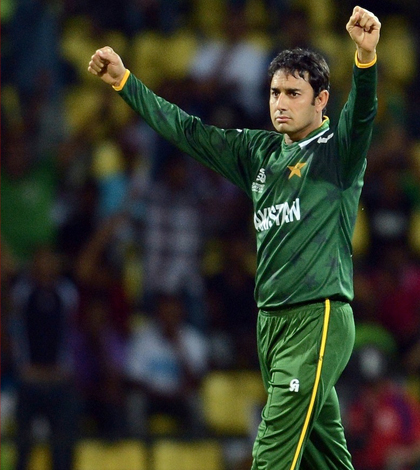 LAHORE: The Pakistan Cricket Board must start paying its players more money for Test appearances, according to top spinner Saeed Ajmal.
Ajmal a private TV channel that Pakistan cricketers were getting less money than their international counterparts.
“Players now want to just play one-day internationals and Twenty20 matches because they are earning more from these formats,” he said. “We don’t get the same financial rewards for playing Tests.
“The problem is that in our country there is little difference in the fees paid out for all three formats and we are not playing as many tests compared to most other countries.
“I have played just 28 Tests in six years so the opportunities to earn well from this format are less compared to ODIs or T20s,” added Ajmal.
Pakistan play fewer Tests than most because the other teams do not want to tour the country due to security concerns.
“I would advise our board to not only raise Test match fees … but also create a big difference in the fees paid for all three formats,” said Ajmal, 35, who has taken 147 wickets in 28 tests and 146 wickets in 92 ODIs.
“Test cricket should form the basis for our doing well in the other formats. Unless we excel in the longer form we will face a crisis.
“There is too much Twenty20 cricket and that is hurting Test cricket.”
Pakistan host a Two-test series against South Africa in the Middle East later this month. The first game in Abu Dhabi starts on Oct. 14.

Author syncmagPosted on March 28, 2013May 7, 2013
DUBAI: Indian fast bowler Ishant Sharma has been fined 15 per cent of his match fee for breaching the ICC Code of Conduct during...
Read More