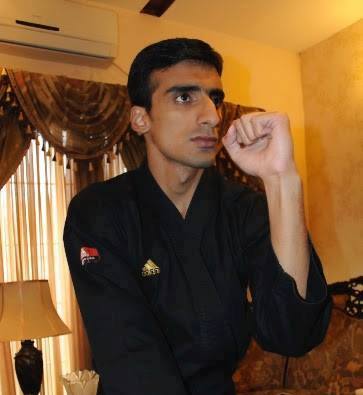 ISLAMABAD: Pakistan Taekwondo black-belt Ahmad Amin Bodla has broken the Guinness World Record for most squat thrusts in one minute with 40 pounds weight on the back.

Talking to APP Bodla said he did 23 repetitions while the previous record was 21 by Paddy Douyle of England.
Bodla said it was a great honor for him to make records for Pakistan. “I work very hard for these performances. I have achieved a lot of international recognition over the last few years.” he said.

However, Bodla was disappointed that in Pakistan you don’t get reward for these activities.
“The priorities of the concerned sports authorities do not facilitate
athletes other than cricketers,” he said.

Just how to Publish a Written Report Summary

Author adminPosted on December 10, 2014December 10, 2014
OSLO: Malala Yousafzai of Pakistan and Kailash Satyarthi of India have received the Nobel Peace Prize for risking their lives to fight for children’s...
Read More

Author adminPosted on October 23, 2013
YouTube is launching its own music awards and Lady Gaga will perform at the first-time event. The Google Inc.-owned company announced Tuesday that Eminem...
Read More
In-Sync
Author syncmagPosted on March 28, 2013April 11, 2013
Donning a turban offered to him by the local leaders, Nawaz urged the nation to vote his party to power if they wanted an...
Read More

Author adminPosted on February 13, 2013
Gujarat chief minister NarendraModi met Prime Minister Manmohan Singh on Wednesday and expressed his unhappiness over the Centre’s refusal to provide gas to the...
Read More

Author adminPosted on June 23, 2015
WASHINGTON: Nobel Peace Prize laureate Malala Yousafzai urged the World Bank and United Nations on Monday to raise the focus of education in their...
Read More