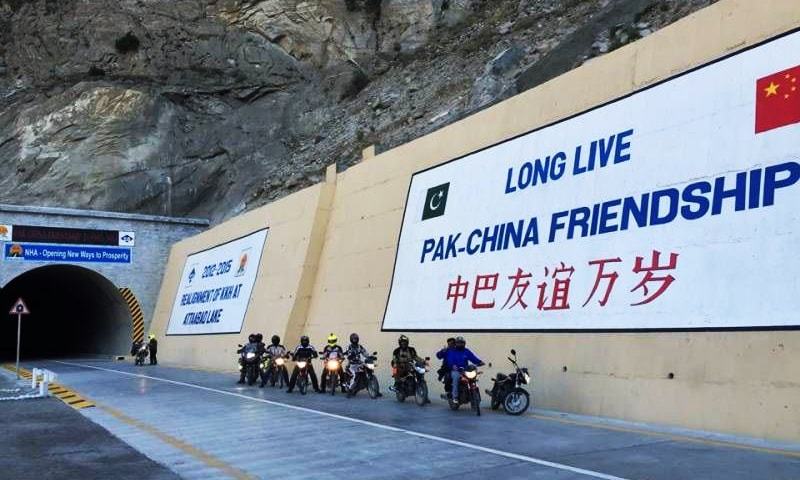 ISLAMABAD: Prime Minister Nawaz Sharif on Monday inaugurated the Pakistan-China Friendship Tunnels, which have been constructed by China over the Attabad Lake in Gilgit-Baltistan’s Hunza valley.

The seven kilometre long five tunnels are part of the 24km long portion of the Karakorum Highway (KKH) which was damaged in 2010 due to land sliding at Attabad.

Two bridges and 78 small bridges have also been constructed on the rebuilt section of the highway, Radio Pakistan reported.

The tunnels have been constructed by the National Highway Authority (NHA) in collaboration with the China Road and Bridge Corporation to restore part of the road which had submerged under the Attabad Lake.

The project has been completed in a span of three years and two months.

NHA officials briefed the prime minister on the details of the project and status of upgradation of other parts of KKH.

Earlier, the premier was received at Gilgit Airport by chief minister GB. The chief minister briefed the prime minister about progress of other developmental projects in the area and performance of GB government.

Author adminPosted on September 12, 2013September 12, 2013
VENICE: US film-maker William Friedkin, who petrified cinema-goers with “The Exorcist”, was awarded a lifetime achievement award by organisers of the Venice film festival...
Read More

Rob Ford Fights Back As Kathleen Wynne Refuses To Meet

Author adminPosted on February 4, 2014May 23, 2014
The divide between Rob Ford and Kathleen Wynne is growing, as the Ontario premier continues to refuse to meet face-to-face with Toronto’s mayor to...
Read More

Author syncmagPosted on January 16, 2013January 17, 2013
Do I hear Imran Khan fans disagreeing? Ah yes, it’s the tsunami they will unleash that will wipe out the world we know and...
Read More
In-Sync
Author syncmagPosted on March 25, 2013April 11, 2013
Teppothsavam one of the most pictorial festivals of Sri Parthasarathy Temple is being held now. The festgenerally begins from the New Moon day during...
Read More