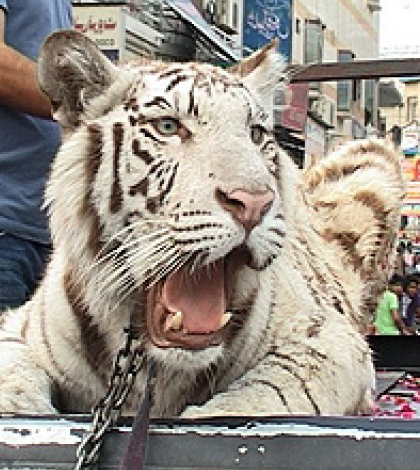 LAHORE: Ever since the start of election season, live tigers and lions are a constant feature at Pakistan Muslim League-Nawaz (PML-N) political rallies.

The party chief’s daughter, Maryam Nawaz, in particular enjoyed bringing the white tiger to her rallies because of the attention it attracted. But the show stopper tiger is no more .

Sources told Dawn.com that the rare tiger was brought unconscious to the University of Veterinary and Animal Sciences in Lahore on Tuesday evening. The veterinary doctors tried to revive the animal but failed and the rare specie died this morning.

The issue of live animals at PML-N rallies had also been brought to the Election Commission’s attention last week, which retorted saying the matter is out of it’s jurisdiction.

According to WWF, white tigers are endangered and are extremely sensitive to heat and noise. With temperatures soaring past 30 degrees Celsius in Lahore and there being nothing but noise at political rallies, the white tiger fell sick and lost strength due to dehydration.

The WWF also confirmed that famed actor and conservationist Faryal Gohar will be filing a petition with the Lahore High Court (LHC) against the illegal use of wildlife animals at rallies and other such activities. The WWF will be supporting the petition.

The white tiger belonged to a party worker who showed off his ‘pet’ at Maryam Nawaz’s political rallies. The animal was extensively seen in PML-N rallies across Punjab.

A man can be destroyed but not defeated

Author adminPosted on November 5, 2013
ISLAMABAD: Prime Minister Nawaz Sharif will face the first formal test of his economic policies this week during a visit by the International Monetary...
Read More

Author adminPosted on August 10, 2015August 10, 2015
HARIPUR: The Election Commission of Pakistan (ECP) has decided to introduce the biometric system at 30 out of NA-19, Haripur’s 537 polling stations on...
Read More

Author adminPosted on November 5, 2013
Yana Lukasheh Looks to Turn Laval into “City of Culture” Yana Lukasheh, who turns 26 in two weeks, admits her age could be a...
Read More

Author adminPosted on December 3, 2013May 23, 2014
The roof of the Olympic Stadium is deteriorating at a faster rate than anticipated, ripping more than 2,000 times in the last year alone....
Read More