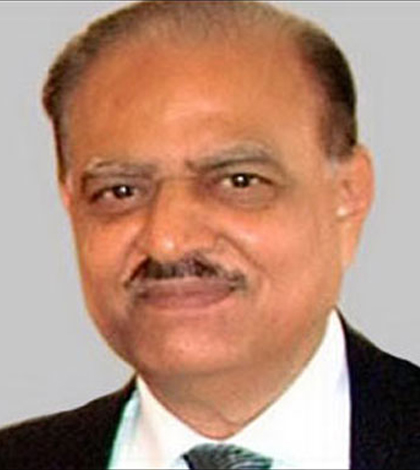 ISLAMABAD: The PML-N’s presidential candidate Mamnoon Hussain won the presidential election by a thumping majority on Tuesday.Mamnoon secured 432 votes against the PTI’s candidate Justice (retd) Wajihuddin Ahmed who polled 78 votes and was elected as the 12th President of Islamic Republic of Pakistan for the next five-year term.

The 73-year-old businessman from Karachi has become the country’s 12th president. He will enter the President House on September 9 after President Zardari quits on September 8.The Pakistan People’s Party (PPP), ANP and PML-Q boycotted the election and stayed away from the Parliament House.

The Chief Election Commissioner (CEC), Justice (retd) Fakhruddin G Ebrahim, who acted as the returning officer, announced the results. According to the vote break-up, Mamnoon Hussain clinched 277 votes from the National Assembly and Senate, 338 from the Punjab Assembly, 64 from the Sindh Assembly, 41 from the Khyber Pakhtunkhwa Assembly and 55 from the Balochistan Assembly.

Speaking on the occasion, the CEC said a transparent election was held for the first time in the history of the country adding that nobody should have boycotted the presidential election. The CEC said a total of 887 votes were polled out of which nine were rejected.

Mamnoon Hussain sat in the front row in the National Assembly. He was warmly greeted by the PML-N parliamentarians and the members of allied parties soon after the presiding officer announced the results.

Notwithstanding PPP’s boycott of the presidential election, President Asif Ali Zardari, who is co-chairman of the party, felicitated Mamnoon Hussain on Tuesday on his election as the 12th president of the country.
“In his message of felicitation President Zardari wished the president-elect well in the discharge of his responsibilities as head of the federation,” president’s spokesman Senator Farhatullah Babar said.
Prime Minister Nawaz Sharif also congratulated Mr Hussain and expressed the hope that he would come up to people’s expectations and the trust that their representatives had reposed in him.
PTI chairman Imran Khan also felicitated the president-elect but expressed concern over the change of schedule of the election and termed it non-transparent.
Mr Khan said in a statement: “President is a symbol of federation and we hope that Mamnoon Hussain will rise above his political affiliation while performing his duties as head of the state.”
MQM chief Altaf Hussain also felicitated the newly elected president and Mr Sharif.

Author adminPosted on June 18, 2013
MUMBAI: The famous filmmaker and veteran director of Indian film Industry Karan Johar would play a negative role in the movie ‘Mumbai Velvet’. The...
Read More

Author syncmagPosted on February 14, 2013February 14, 2013
Tehreek-e-Minhajul Quran chief DrTahirulQadri will move the Supreme Court within one or two days for removal of all provincial election commissioners and the discretionary...
Read More

Author adminPosted on October 23, 2013
NEW YORK CITY: The New York City Opera said Tuesday it would close and file for bankruptcy after 70 years, having failed to secure...
Read More

Author syncmagPosted on May 13, 2013May 13, 2013
With just three days left for the elections, Pakistan Tehrik-i-Insaf chairmanImran Khan was wounded in his head after falling off a forklift that was...
Read More

2015 election: Women make up less than a third of candidates so far

Author adminPosted on January 13, 2015
Women hoping to be more equally represented in the House of Commons are likely to be disappointed after the next federal election. With just...
Read More