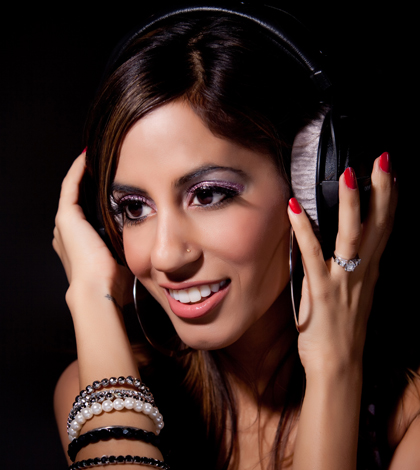 Canadian in appearance, Indian in origin, Universal in appeal, Prita Chabbra is a multi-talented artist. For her music is her passion and social work is her life! From being the first South Asian Recording Artist to perform the American and Bilingual Canadian anthems for the NHL and NBA and the Winner of “Best World Music” at the 2012 Toronto Independent Music Awards, Prita has been a revelation in a short span since her entry!

Prita has been singing and writing music since childhood. Prita has participated in the grassroots HIV/AIDS research study trip to Malawi and is an active advocate for the cause. Prita has toured steadily across North America since the release of her debut CD “Spread The Word” in 2010.
Prita’s music has received airplay on several top 40 radio stations in Quebec, and she’s been featured at shows alongside #1 Billboard artist Jay Sean ; world renowned comic Russell Peters ; and Grammy nominee Eric Roberson to name a few.

Syncmag get the opportunity to interview Prita and here are the snippets of her frank and candid chat, Enjoy!

1. We would like to know about your family and educational background.
I have 2 younger brothers and a wonderful dog named Lucas. My parents were born in
Uganda, Africa and my brothers and I were born and raised in Montreal. We are
Punjabi, Sikh.

2. When you came to realize that singing is your cup of tea?
In grade 2 when I heard Bette Midler singing “From A Distance”. Before then, I knew
I wanted to be a star, and I adored Jem (a cartoon pop star). A flame was lit in my heart and it has yet to die out!

3. When did you start your career in music? Who is your mentor?
I officially started in 2008, when I began recording my first CD called “Spread the Word”. It was really hard because I didn’t have any mentors or anyone to help me, which was why I made a lot of silly and naive mistakes. My producer for “Spread The Word”, Benoit Babin, was a great help. So was my singing teacher at the time, a lovely woman named Madeleine. Before that, I spent all my time in karaoke bars and open mics perfecting my onstage presence, and getting comfortable on stage. I learned a lot by making a lot of mistakes!

4. Who has been the greatest inspiration for you?
I’d have to say Oprah Winfrey. She always said believe in yourself, and follow your dreams and your bliss. It really gave me the confidence I needed to take those first few scary steps. Those steps are really the scariest because you don’t know what you’re doing or what to expect. But once you get the hang of it, you realize it was never that bad in the first place! I’m also very inspired by all the people I met in Malawi while on a HIV/AIDS research trip there. They gave me the opportunity to sing and really encouraged me to follow my dreams. They are my greatest motivators and cheerleaders 🙂

5. What is the importance of chasing one’s dream in your view? How you feel that you are the one of those few people who successfully got their dreams fulfilled?
For me, it’s just about living life with as few regrets as possible. I will always have my accomplishments to look back on and feel proud of. I believe we are all here for a reason, and you find that reason by following and doing the things that make you happy. I always loved singing and if I didn’t pursue this professionally, I would have never known my own strength and talent. I would have never known that anything is really possible. I may not be super famous right now, but I feel super accomplished because I have very few regrets! I’m still making my dreams come true one day at a time, but dreams coming true have very little to do with the final destination. It’s all about the journey.

6. You are associated with the noble causes like AIDS Awareness. Don’t you think that the diseases like AIDS seem more frightening than they really are? How much there is need to create awareness about AIDS?
The really scary thing about HIV/AIDS is the stigma around it, and until that stigma is gone and a cure is found, awareness is needed. HIV/AIDS has killed more people than any other disease in the entire world. We have a lot of resources here in North America and we don’t talk about this problem enough.

7. Being belonging to different ethnic group, did you face any obstacles in your singing career?
Yes, lots! Especially because I sing in English. At times it seems I’m too “ethnic” for the mainstream and too “white washed” for the Indian community. Despite this little problem, I’ve found tons of supportive fans and individuals. When you’re an innovative trendsetter, you’re bound to upset people, but eventually I know they’ll come around. I know I’m doing what I was meant to do and I’m paving the way for generations after me.

8. How you see the challenges of fast pace life of the one making their way to success in western community?
It’s a lot of fun! I have a lot of energy and it really suits me.

9. Anything about the Prita, no one knows?
I love riding my bicycle; it’s a therapy for me. Another therapy that really works is eating a Big Mac 🙂 I love them!

10. You are socially very active woman, how do you balance your personal and professional life?
They are both one. When you love what you do, it all mixes together and nothing feels like work.

11. You have won various awards, what is your greatest achievement so far?
I’ve had many. Being the first South Asian recording artist to sing both the Canadian and American national anthems for the NBA and NHL is a great honor. I’ve also sang for the Prime Minister of Canada and won for “Best World Music” at the 2012 Toronto Independent Music Awards.

Still, my greatest achievement was receiving a magnet from a fan that reads: “The greatest things in life cannot be seen or touched; they can only be felt with the heart.” I got it from a fan who was in the hospital and he said that’s what my music did for him, it touched his heart. It changed him and gave him hope. You can’t put a price on that one, and it’s the very reason I make music – to move people and to help others with my music.

12. What next you are up to?
I’m performing in my first theater play on October 10th in Toronto! It’s a play called “Land of the Eternals” and it stars Canadian Olympic Champion Elvis Stojko. I’ll be singing 2 songs, representing “the universe”. I’m very excited!

13. Would you like to share anything worthy with our readers!
Do what you love. Work hard, don’t give up and your dreams will come true! Thank you for being a fan and for all your love! Check me out at pritamusic.com and sign up to be a VIP, you’ll get special pressies!

Author adminPosted on July 28, 2017September 13, 2017
This is a curse believed to be done by a person when they are unaware, a knowledgeable or your situation. This is widely among...
Read More
Sync Rendezvous
Author syncmagPosted on March 15, 2013May 17, 2013
This year SynesthAsia continued the legacy dedicated to Fashion, Entertainment and philanthropy -along with a uniquely Asian theme–by interpreting an intersection of Eastern and...
Read More

Author adminPosted on June 25, 2016
Sunidhi Chauhan, one of India’s top 10 singer, has been entertaining audiences for over 15 years. Chauhan is praised by the best, including Lata...
Read More

Author adminPosted on November 5, 2013November 5, 2013
Mrs. Mary Deros, first elected in 1998 as City Councilor for the district of Park Extension in the City of Montreal, was the first...
Read More