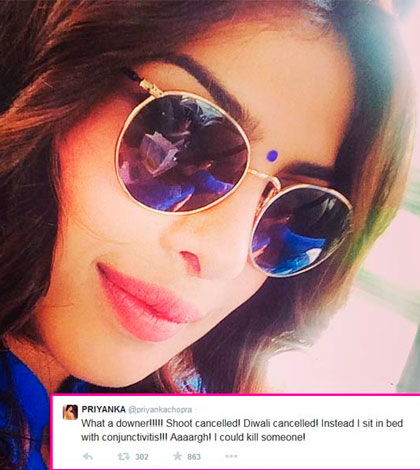 Priyanka Chopra is currently suffering from conjunctivitis and that seems to have upset her busy shooting schedule. The actress is working on Sanjay Leela Bhansali’s Bajirao Mastani but due to the eye infection she has had to put her upcoming production with Madhur Bhandarkar titled Madamji on hold.

Madamji‘s shoot has now been postponed for a month and the film will go on floors by November 30. The film revolves around an item girl who climbs up the ladder of success to become a politician.

Due to Priyanka’s ill-health the shooting has been put on hold but after she recovers and wraps up her shoot with Bhansali she will get straight to work on her maiden production venture.

We are excited to see PC play a gritty role after Mary Kom, what about you BollywoodLifers?

Author adminPosted on December 11, 2014
While Superman & Radha Nachegi from Tevar have gone on to climb the music charts , the newest song from the Arjun Kapoor &...
Read More
Sync Tainment
Author syncmagPosted on March 14, 2013April 11, 2013
MUMBAI: Priyanka Chopra has refused to sing for Bollywood films. Priyanka said she had the desire to sing but was restricted by her contract.Fans...
Read More

Author adminPosted on May 17, 2013
Bollywood actress and former Miss World Aishwarya Rai Bachchan will be walking the red carpet at this year’s Cannes once again but not alone....
Read More
Sync Tainment
Author syncmagPosted on March 19, 2013April 11, 2013
Malaika Arora Khan is known to be quite humble and down-to-earth. So when we heard the actress created a scene at a recent event...
Read More

Author adminPosted on January 4, 2016
The much anticipated film of 2016, Shivaay has left the audience surprised and overwhelmed with its first look! Well, we hear that Ajay Devgn...
Read More