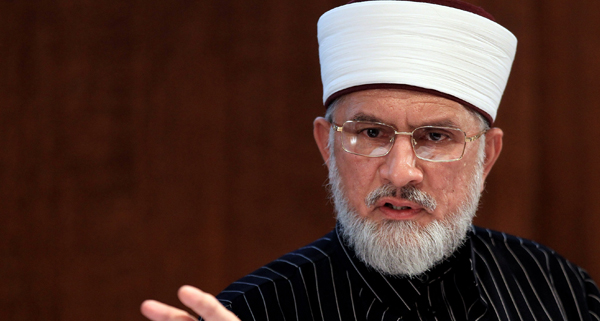 Tehreek-e-Minhajul Quran chief DrTahirulQadri will move the Supreme Court within one or two days for removal of all provincial election commissioners and the discretionary funds of the prime minister and chief ministers amounting to billions of rupees, separately. Qadri was addressing a press conference on Thursday at the TMQ headquarters four days after the government delegation representing all the ruling coalition parties turned down these demands during negotiations with him. Qadri said: “I want restructuring and reformation of the Election Commission of Pakistan since its constitution was totally unconstitutional and the mode of appointment of election commissioners given by the Constitution could never be revoked by the president, parliament, cabinet or any parliamentary committee,” Qadri added. He said he would appear before the Supreme Court personally to present his case. He said another petition would be moved before the apex court for providing 50 percent subsidy on daily use commodities. He said he was trying to reconstitute the ECP so that the upcoming general election could be held in a transparent, free and fair manner.

Author adminPosted on October 19, 2015
Canadians have started voting in fiercely-contested parliamentary elections that could give them their first new leader in nearly 10 years. Incumbent Conservative PM Stephen...
Read More

Author adminPosted on August 21, 2015September 17, 2015
Pakistani-American Hollywood actor Faran Tahir was recently spotted in San Diego, California (USA), completing America’s Finest City Half Marathon. This marks the culmination of...
Read More
In-Sync
Author syncmagPosted on March 14, 2013April 11, 2013
BUREWALA: Federal Interior Minister Rehman Malik on Sunday said that a list of 734 terrorists had been given to the Punjab government that these...
Read More

Author syncmagPosted on February 4, 2013February 4, 2013
The latest buzz is that Rockstar babe Nargis Fakhri and Dhoom boy Uday Chopra are to set to get married this year. The rumour...
Read More