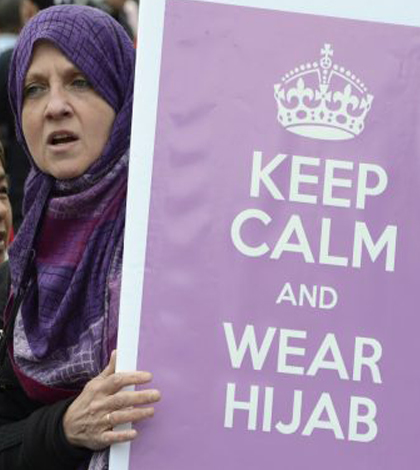 The news in Quebec – and in many other parts of Canada – has been flooded in the past few weeks with stories about the newly-proposed Charter of Quebec Values. Formally announced on Tuesday, September 10 (although some details had been leaked a couple weeks prior), the Quebec government has released its proposals and rationale for a controversial charter of Quebec values, a key element of the Parti Québécois’s election platform last fall.

Citing the “obligation to remain independent of religious authority,” the draft documents say the government will legislate, for the first time, a firm separation of religion and state and will curtail “religious accommodations.”
• Charter of Quebec values would ban religious symbols for civil servants
• ‘Charter of Quebec values’ will unite province, Premier Marois says
It would ban public sector employees from donning “conspicuous religious symbols,” including headscarves, yarmulkes, turbans, and large crosses at work, but allows certain religious jewelry, as long as it is “not very visible”.
The proposal also requires people receiving state services “to make their faces completely visible,” a measure aimed at banning some traditional head-to-toe garments worn by Muslim women.
The Quebec minister in charge of the issue, Bernard Drainville, said recently that ridding the region of the public wearing of religious apparel by government workers would help provide a greater sense of unity among Quebecers.
The proposal also aims to foster “the religious neutrality of the state”, he said.
“The best way to respect all Quebecers, the best way to respect all beliefs and all religious, is for the state to have no religion,” Drainville said.
The prospective ban has sparked strong criticism, including from a number of federal politicians, including the head of Canada’s office dealing with issues of multiculturalism. The Charter has has evoked angry responses from politicians across the country. All three federal party leaders have spoken strongly against it.
Liberal leader Justin Trudeau has accused Quebec Premier Pauline Marois of playing “divisive politics” all in an attempt to “distract from the serious economic challenges” that Quebec is facing.

The leader of the Quebec Liberals, Philippe Couillard says he’s against any law that leads to employment discrimination, and that Muslim women who wear a veil will always be welcome in his own party. The PQ plan will become law “over my dead body,” Couillard said on Sunday at a party meeting on women’s issues in Montreal.
Minister for Employment, Social Development and Multiculturalism, Jason Kenney, said he was “very concerned” the measure “would limit the ability of Canadians to participate in our society, and that would affect the practice of their faith”. He also said that many Quebecers, including municipal politicians in the Montreal region and “even very serious Quebec nationalist commentators,” have criticized the PQ’s “values charter,” which needs approval from the legislature before it can become law.
“No to the charter,” Loud and proud, protesters in the thousands marched peacefully through Montreal’s downtown core Saturday afternoon to voice a single demand — withdrawal of the proposed Charter of Quebec Values by the Parti Québécois minority government. While also chanting “Quebec is not France,” a reference to a similar law which has been in force in that country for more than two years. Organizers said the event drew at least 40,000.
Many from the Jewish community were not participating in Saturday’s protest because it was scheduled on Yom Kippur, the holiest day in the Jewish calendar.
Mireille Paquet, an associate professor of political science at Concordia University, says that the charter reinforces strong stereotypes about Quebec.
“That is that people in Quebec would be more racist, more intolerant, and that sovereignty is also about exclusion,” she told CTV News Channel.
Paquet said criticism is coming from parts of the country where multiculturalism is a valued part of society, but that other, less diverse regions favour the proposal.
“I think that it is important to realize … that for the government, it is seen as an integration policy,” Paquet said. “The impact of it might lead to exclusion, but I think that it’s a complicated topic.”

Opposition to Quebec’s proposed values charter is picking up steam after an online petition calling for an inclusive Quebec surpassed 12,000 names, including cultural icons like Dan Bigras, Philippe Falardeau, Michel Rivard and Richard Desjardins.
The manifesto at quebecinclusif.org denounces the charter for “taking away fundamental rights from some of our most vulnerable citizens” and blames certain media outlets for whipping up anti-immigrant sentiments.
Opinion polls suggest the values charter has boosted support for the PQ minority government. But Weinstock said the fact prominent artists are speaking out against the charter shows the measure could backfire.
While the charter might win the PQ more support from conservative voters in rural areas and small towns, it could alienate progressive voters who have supported the PQ in the past, he said.
The Centre for Israel and Jewish Affairs (CIJA) released a statement saying that they are in favour of religious neutrality and the equality of men and women, but added the charter will unnecessarily divide Quebecers.

Author adminPosted on November 2, 2016September 14, 2017
Good Stance: The way you carry yourself represents your personality. People with slumped shoulders and sluggish movements display a lack of self confidence. They...
Read More

Author adminPosted on February 7, 2014May 23, 2014
Re-Defining one of Europeans Ancient Cultural celebrations, PUBCRAWLING! Dating from as far back as 1915 where it first started simply defined as a drinking...
Read More
Sync Potpourri
Author syncmagPosted on March 14, 2013April 11, 2013
Technological dynamism, fierce competition and unstable economies have blurred the existing concepts of retirement. Ruchi Kumar finds out why many retirees choose to keep...
Read More

Things You Can Do With Your Tax Money

Author adminPosted on August 5, 2013August 5, 2013
Tired of hearing about what not to do with your tax refund? Here’s a look at 5 smart and actually powerful things you can...
Read More
Sync Potpourri
Author syncmagPosted on March 14, 2013April 11, 2013
Children who have mentors are significantly more confident in their academic abilities and considerably less likely to display behavioral problems, a new study has...
Read More

Author adminPosted on August 23, 2016August 23, 2016
A detailed new map of the human brain’s outer layer identifies nearly 100 brain areas that have not been previously reported, according to a...
Read More