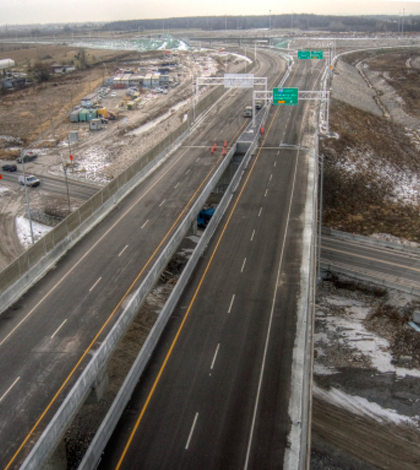 A group of South Shore mayors are reeling after the Parti Québécois government announced its decision Friday to give back 300 hectares of land to the Kahnawake Mohawks.
The farmland was appropriated in 2006 during construction of the Highway 30 project and will be ceded back to the First Nation in the near future. It lies along the border of Kahnawake, Châteauguay, St-Constant, Ste-Isidore and Ste-Catherine.
But the mayors claim they were never consulted throughout the process, which led them dumbfounded by Friday’s announcement.
“Right now, (the PQ) has been talking and negotiating with Kahnawake and telling us on one occasion they pass by and say: ‘Listen, we started to discuss about it with Kahnawake, and we’ll come back and you’ll be part of the process,’ but that never happened,” Châteauguay Mayor Nathalie Simon told CTV Montreal.
Mohawk band council spokesperson Joe Delaronde said he doesn’t understand the source of controversy.
“This has been in the works for years now, where’s the surprise,” he told The Gazette. “I guess that’s how it goes sometimes.”
Delaronde would not comment further on the matter until it is brought before the band council Monday. Reports of negotiations over the 300 hectares were widely publicized in The Gazette and other media as early as July 2012.
Simon told CTV Montreal she believes the land that will be handed over to the Mohawks belongs to her municipality. Calling the 300 hectares “our territory,” the statement elicited some reaction over Twitter and other social media — with observers noting the irony of a non-aboriginal politician complaining about losing land to an aboriginal reserve.
This may be the first time since Confederation that land has been given back to the Kahnawake Mohawks. The First Nation is in the preliminary stages of filing a 40,000 acre land claim with the federal government that dates back to the 17th century.

Help Your Child Get More Exercise

Present Musharraf by all means on Feb.24: ATC

Author adminPosted on February 3, 2014May 23, 2014
QUETTA: Anti-terrorism Court (ATC) here on Monday, while adjourning the hearing of Akbar Bugti murder case until February 24, directed that Pervez Musharraf be...
Read More

Author adminPosted on June 23, 2015
KOLKATA: Sister Nirmala Joshi, who succeeded Mother Teresa as head of her Missionaries of Charity in the eastern Indian city of Kolkata, died on...
Read More

Author adminPosted on September 14, 2015
ISLAMABAD: Prime Minister Nawaz Sharif on Monday inaugurated the Pakistan-China Friendship Tunnels, which have been constructed by China over the Attabad Lake in Gilgit-Baltistan’s...
Read More
In-Sync
Author syncmagPosted on March 15, 2013April 11, 2013
Police officers arrest a demonstrator during a tuition hike protest in front of the legislature Thursday, March 7, 2013 in Quebec city. About 40...
Read More