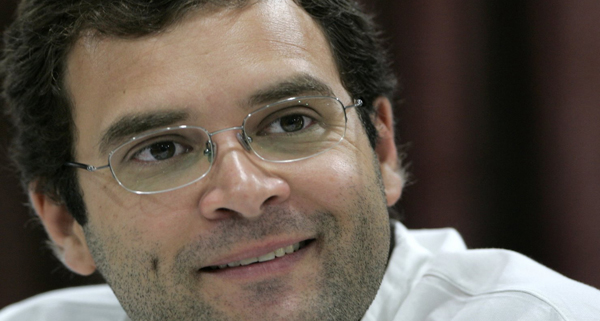 Date of Birth:
19 June 1970, New Delhi, India
Height:
5′ 7½” (1.71 m)
Biography:
Rahul Gandhi is the son of former Indian Prime Minister Rajiv Gandhi and Congress president Sonia Gandhi. Rahul and his younger sister Priyanka have been in the public eye since the day they were born as at the time their grand mother Indra Gandhi was India’n Prime Minister. Even their great-grandfather Jawaharlal Nehru was a Prime minister of India, in fact the first Rahul studied in Modern School, New Delhi for a while and then went to St. Stephen’s College (Delhi) where he did History Hons. After that he went to Harvard and then to London where he was a financial consultant. He returned to India in 1999 and was seen alongside his mother, Sonia Gandhi during the 1999 Lok Sabha campaign. Rahul has not been too much in the public eye, but has always retained a certain enigma about him. The Indian pu b lic is always interested to learn the latest information about him. He is still not married, but is said to have a Columbian girlfriend. Rahul Gandhi and his sister Priyanka spoke to the media for the first time in January 2004 while touring Amethi, the constituency in Uttar Pradesh that has been represented by their father and is currently represented by their mother. Rahul Gandhi and his sister, Priyanka went to Karachi and watched the first ODI match between India and Pakistan in March 2004 and the public in Pakistan were happy to see them. Their presence in the match proved to be luck for India, it won. The enigma about whether Rahul Gandhi will enter active politics is now over. On March
21, 2004 the Congress party announced that Rahul Gandhi would be the Congress party’s candidate for the Lok Sabha seat from Amethi, currently represented by his mother, Sonia, who has shifted her constituency to Rae Barelli. Here’s to a genuinely brilliant player who uses as heart as well as his head and is amply blessed with both. Do look out for the essay from the man they call the King.  Trivia: Son of former Indian Prime Minister, Rajiv Gandhi, grandson of Indira Gandhi and great grandson of Jawaharlal Nehru. Is the second member of the fifth generation of the Nehru-Gandhi family to enter into active politics. His younger cousin Varun Gandhi joined the BJP in early 2004. Rahul is however, the first member of the 5th generation of the Nehru-Gandhi family to contest any election. Varun is still under age to stand in an election.

Where Are They Now:
(July 2006) Elected to Lok Sabha from Amethi in 2004. According to reports in the media and party sources, Gandhi is soon going to be inducted into the Congress Party Working Committee and become a General Secretary in charge of Uttar Pradesh and Frontal Organisations such as the Indian Youth Congress.
Goal:
“There is a work that my father had started, a dream he had dreamt. I come to you today saying…allow me to
turn that dream into reality” About him Dr Anil Wilson, the principal of St Stephen’s College: “He was a diligent student. He had no airs about the famous family he belonged to. I think he left college because of security concerns. We really did not get an opportunity to assess his academic brilliance.”

Author adminPosted on May 13, 2013
Ranbir Kapoor and Katrina Kaif, new rumored Bollywood couple are sort of making their relationship pretty obvious by some of the actions. Apparently Ranbir...
Read More

This is why SRK is known as King of Bollywood!

Author adminPosted on April 22, 2013May 6, 2013
Bollywood superstar Shah Rukh Khan is nursing a shoulder injury that he suffered on the sets of his upcoming film Chennai Express but that...
Read More

Author adminPosted on May 17, 2013May 17, 2013
Bollywood baadshah Shah Rukh Khan was conferred with Chevalier Sivaji Award, constituted after veteran Tamil actor Sivaji Ganeshan, at the 7th edition of Vijay...
Read More
Sync Tainment
Author syncmagPosted on March 19, 2013April 11, 2013
It was earlier reported that Katrina and Hrithik Roshan will yet again share a steamy kiss in their upcoming film ‘Bang Bang’. However, reports...
Read More