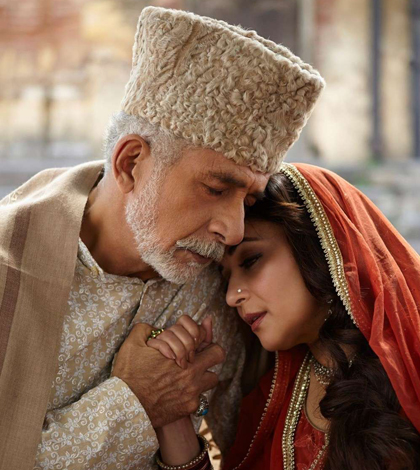 To steal jewelry or a woman’s heart – now, that is the question!

“Dedh Ishqiya”, one of the most probable, unconventional new-age sequels from Bollywood, is a hard movie to categorize: it is a lumpy, sharp-tasting mix of emotions that’s immaculately written, directed and acted – and yet isn’t remarkable.

The opening, with the black screen voice over story about a female parrot that corrupts a pair of ‘maulvi’ parrots, is the perfect clincher; it seamlessly re-links “Dedh” to “Ishqiya” without missing as much as a beat or the franchise’s intrinsic sensibility about women turning men against each other.
We don’t need the blank screen to cut and reveal where Babban (Arshad Warsi), is – or with whom. Left at the mercy of Mushtaq (Salman Shahid, screen-chewing excellent), a recurring boss, Babban pleads his way out by brokering a deal to find Khalujan aka Iftikhar (Naseeruddin Shah) who scooted when their last heist went bad. (Mushtaq’s reasoning for letting them go time and again is a perfect patch to “Ishqiya’s” last scene).

A while later, Iftikhar reappears as a Nawab-cum-poet in Mahmudabad. The guise turns him into one of the potential suitors out to win the widowed Nawab’s wife’s hand in a poetry contest. Yes, no need to say it: the set-up is as kooky and incredulous as it sounds.

The India that director/co-writer Abhishek Chaubey fleshes out is something out of an old art-house movie: a place between now and yesterday that’s antiquated and rustic. Despite being set today, this place is a lost haven, where light spills and reflects from windows and doors, illuminating big vacant rooms and full-sized beds that went out of vogue as soon as the “angaraiz” went their way (that is, unless one visits old heritage hotels that function as tourist attractions).

The Nawab’s widow is Begum Para (Madhuri Dixit-Nene), and is, for a lack of a better word, a stunner. Her aide, Muniya (Huma Quraishi), is zesty and assertive. Babban, traces Iftikhar to Mahmudabad and is immediately fascinated by Muniya, while his “khalujan” is here for love and not money (there’s an open backstory that gives him a flickering of a reason to come here).

Begum Para, meanwhile, has another suitor – not counting the extras, amongst whom one recognizes a few well-known poets. That man is Jaan Mohammad (Vijay Raaz), a local hoodlum with a layered agenda. Notwithstanding his villain-like conduct, Jaan Mohd. pretends to be a faux poet, whose works are impromptu (and badly worded) verses by a kidnapped poet (Manoj Pahwa).

As the running time expands, interest starts dipping here and there (esp. during the pre-and-post intermission minutes). Logic lapses a few times as well, but without flashing a spotlighting on itself (eg. Jaan Mohd. convincing the visitors that he is suddenly a well-versed poet).

For every dip, there are saves. A rip-roaring climax, and the dastardly, venal disposition of the key players makes “Dedh Ishqiya” a fresh, if not original, movie in a sea of seen-it-all-before capers. The franchise’s kinetic whim, and Iftikhar and Babban grounded nature – even with their small-time crook temperament – still function as the movie’s hook. Despite not rooting or caring for them, its hard wishing something bad happens to these two. (Mr. Shah’s Iftikhar in particular, adds that slight notch that makes him more appealable than Mr. Warsi’s simple-minded ruffian).

However their counterparts, Muniya and Begum Para, are a different story. Regardless of casting Ms. Quraishi and Ms. Dixit-Nene as very serious people in a conflicting emotional predicament, the scope of their personalities and sentimentalities is less than that of Vidya Balan’s jilted wife in “Ishqiya”.
Co-writer/Producer Vishal Bharadwaj (also the music director), in spite of the shortcomings (which includes a lackluster soundtrack), has a better motion picture in “Dedh Ishqiya”. A “Dhai” (two and a half) is more than welcome – and sooner, rather than later.

“Dedh Ishqiya” is rate A for scenes of simulated sex, crude language, profanity, itchy trigger fingers, and – inexplicably – no deaths. The movie would function just as well without the ‘A’ rating.

Author adminPosted on November 20, 2013May 23, 2014
‘Diana’, the recent biopic of Princess Diana, has bombed on its opening weekend in the US. The film, which stars Naomi Watts as the...
Read More