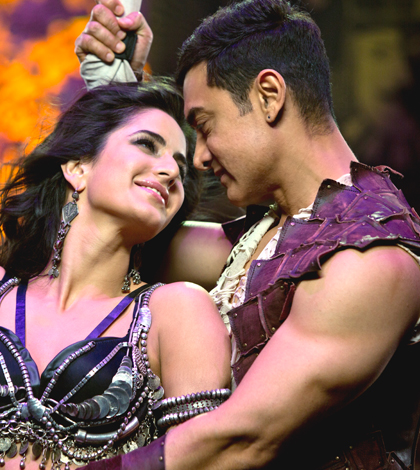 After a stunning start on Friday, Dhoom 3 continues to storm both the Indian and Overseas Box Office!
Dhoom 3 maintained the momentum and the fans can’t seem to get enough of this caper. It has set new weekend records in every international market as well as on the home turf, where it’s on course to be the biggest hit.
According to a report in Koimoi, the Aamir Khan film had a tremendous first week which is again the biggest ever in the history of Indian cinema – with approx 185.50 crores (including Tamil and Telugu version) and 3.13 billion business throughout the world.
YRF’s decision of not releasing the film with previews on Thursday to keep the plot under wraps and open on the same day worldwide, strategically worked at the Box Office.
The third installment of the Dhoom series emerges as one of the most interesting high octane stylish action masterpieces. Definitely a must-watch end of the year entertainer!

STORY
The Dhoom combo Mumbai polices, Jai (Abhishek Bachan) and Ali (Uday Chopra) is assigned to catch a bank robber in Chicago. Similar to the second Dhoom, the story’s core revolves around the antihero – Sahir (Aamir Khan). The basic storyline, although is an old tale of revenge seeking justice, is told in an extremely interesting manner. However, flaws were pointed out by the plot’s resemblance to The Prestige’s and Now You See Me’s.

SCREENPLAY
Probably the biggest element of success in Dhoom 3 is the screenplay. Each frame has gone through a vivid and thorough planning with trial and error, which explains the prolonged shooting period. The director has made the movie, audience friendly from the word go. Interesting scenes such as The Great Indian Circus performances, bank robbery, Sahir encountering his younger self, extended yet nail-biting motorcycle chase, Samar abruptly tunes himself to Sahir and so on are among the reasons audience would not regret the movie ticket they paid for. One should watch out for the interval block! The existence of two Aamir Khans in the film was revealed in the most interesting possible way! In a massive movie carried out in United States, director Vijay Krishna still managed to chip in India into the picture which gave a home tone and mood for about 10 minutes. The minus points would be the similar cliche scenes that every Bollywood movies have to include such as ‘I know your secret’ analogical dialogue, cheesy climax death scene and hero failing to capture the villain when he had the obvious chance.

CINEMATOGRAPHY
Cinematographer Sudeep Chatterjee has made a great impact with his camera. The way he installed characters, props and settings adequately in each frame he captured was nothing but perfection. His camera added value to the entire film in the form of brilliant and dazzling colors, which brought about a theme tone and mood.

EDITING
If any scenes in Dhoom 3 was slightly longer, it would have been a boring execution. Ritesh Soni has done a wonderful job of film and sound editing. He made the presentation crisp, apt and sound.

PERFORMANCE AND CHARACTERIZATION
Dhoom 3 comprises of 5 principal characters, namely Sahir, Samar, Jai, Ali and Aliya. As mentioned earlier, Dhoom 3 isn’t the usual buddy cop movie as it’s predecessors were. This movie was all about the antiheroes – Sahir and Samar, both played by Aamir Khan. Aamir carries Dhoom 3 throughout and his presence alone, be it as the daring and dashing Sahir or the innocent and cute Samar makes the movie very engrossing. His dangerous acrobat stunts, simple yet beautiful dance and action sequences and powerful dialogue delivery is definitely a bonanza package to catch the movie for. Watch out for the scene where he switches from Samar to Sahir in split seconds! Abhishek Bachan has done a good job as the robust and cool Mumbai cop. His pronunciations and dialogue delivery was very attractive. Ali and Aliya performed fairly with not much scopes for appearance and significance. Jackie Shroff as the twin’s dad and Andrew Bicknell as Mr. Warren Anderson though had short cameo appearances, scores.

CHOREOGRAPHY
Dance (0.5/0.5): Be it the Dhoom foot taps, Malang’s circus performance, Tu Hi Junoon’s cute dance and Kamli’s sexy moves, choreography was done with utmost meticulous effort, without compromising any actors in the movie.
Action (0.4/0.5): The jaw-dropping action sequences came out very successful, thanks to the Hollywood action choreography team and stunt doubles. Though certain action footage felt like it could have been shorter, but it was very negligible. The biggest letdown would be the stunt scenes executed in the first part of the movie, in India. It was very artificially done but the good thing was it was completely overshadowed by the film’s proceeding.

SONGS AND BACKGROUND MUSIC
Pritam should be very proud of his latest offering as he has done a fantastic job. Malang, Kamli, Tu Hi Junoon and the trademark Dhoom Machale Dhoom has been crooned with rich sound effect and various instrument use. The background score helped sustaining the suspense; elevating the action grips and lubricating the movie’s flow.

VISUAL EFFECTS
Tremendous effort has gone in executing the visual effects, right from title card design to most of the high-tech crafts and tools used in the movie. However, visual effects enhanced scenes such as the motorcycle transforming into motorboat and Sahir and Samar falling off the cliff could have been done better.