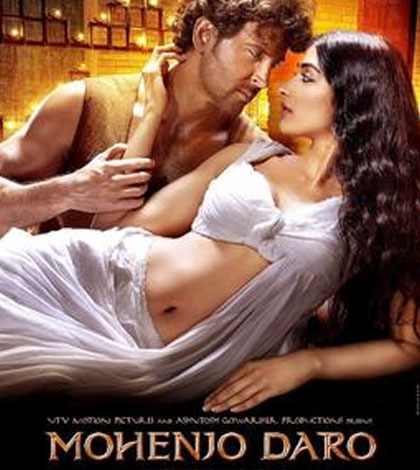 Story: Village lad Sarman is drawn to big, bad Mohenjo Daro and its mascot Chaani. But Chaani must wed Munja, son of Mohenjo Daro’s ruler, Maham. Will Sarman find love – and more in Mohenjo Daro?
Review: Straight away, if you want to enjoy Mohenjo Daro, leave your disbelief by the door for Ashutosh Gowarikar’s newest blast from the past only works as a fairy tale, not nailed in history, but hanging somewhere between Game of Thrones and Baahubali.
It’s 2016 BC and simple Sarman (Hrithik) from ‘hamri Amri gaon’ is drawn to the city lights of Mohenjo Daro where he meets Chaani (Pooja), the pretty city mascot. Sarman and Chaani fall in love – but Chaani must marry brutish Munja (Arunoday, convincing as citizen caveman), son of Mohenjo Daro’s pradhan
Maham (Kabir, adequately oozing greed). While fighting for Chaani, Sarman discovers much more in Mohenjo Daro. Why is its river Sindhu dammed? What is Maham trading with Sumer?
Why does Sarman dream of a magical animal? And what will happen to Mohenjo Daro when river and rain combine? Hrithik is fighting fit in Mohenjo Daro – as Sarman, he conveys simplicity and strength, passion and purity with golden-locked ease. Although controlled, his performance shows glimpses of the superstar panache that once had everyone singing, kaha na pyaar hai. But in contrast, Pooja appears drab and Chaani weakly written – in a role that largely features feathers and flashes of leg, an inexpressive Chaani becomes unmemorable and unlike Gowarikar’s stronger heroines (think Radha to Jodhaa) whose performances powered his plots. Here, Chaani is another weak pillar in a shaky story that features horses in the Harappan era (widely believed to have arrived later with the Aryans), Maham wearing a helmet evoking Asterix comics, a Gladiator-like fight involving a trishul and several different pronunciations of
Sarman’s father’s name. The vagaries detract from Mohenjo Daro – but its second half rises, details falling into place. One particular storm sequence raises the entire film, its visual effects, pace and power evoking Hollywood classics like The Ten Commandments. Moments of such imagination showcase Ashutosh Gowarikar’s ability to travel across time and find stories of humanity resisting forced lagans and lagaans, fighting to survive another eon. Mohenjo Daro should’ve had many more grand moments. As it
is, it’s less Ben Hur and more Amrapali – sans the sex appeal of Vyjanthimala’s bustiers. However, its scale and imagination make it an interesting watch – as does the intriguing notion of Hrithik as India’s first pratham sevak.

10 ADVICES FOR A HAPPY FAMILY !

How To Remove Tan On A Daily Basis